Battle of the Books, Winter 2012, First Round :: When We Were Executioners by J.M. McDermott vs. Eyes Like Leaves by Charles de Lint 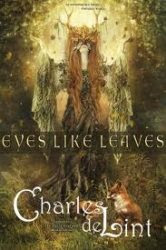 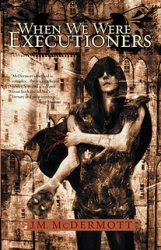 Our first matchup of the Winter Bracket of the 2012 Battle of the Books pits J.M. McDermott's When We Were Executioners against Charles de Lint's Eyes Like Leaves. Per our contest rules, I have read the first 25 pages of both, and the winner will be the book I most want to continue reading.

When We Were Executioners: Night Shade trade paperback, February 2012, 232 pages, cover art by Julien Alday. This is the second book in the Dogsland Trilogy, after Never Knew Another, which received strong reviews last year. McDermott is also the author of Last Dragon (2008), Maze (forthcoming from Apex), and various short fiction and poetry.

Dogsland is a squalid, medieval society, which does not tolerate anyone with demon blood. The tale follows a priest and priestess, demon-hunting "Walkers" who wear wolfskins and can transform into wolves. They are pursuing Rachel Nolander, a half-demon nomad, tracking her using memories drawn from the dead skull of her former lover Jona. The book begins with a series of flashbacks to Jona's memories, which is a nice way to introduce the story and characters, although the effect is somewhat diminished by the fact that Never Knew Another began the very same way.

Eyes Like Leaves: Tachyon trade paperback, February 2012, 313 pages, cover art by Lauren Kelly Small. Charles de Lint has been one of the leading authors in the fantasy field since his first full-length novel appeared in 1984. He has published some 70 books and won the World Fantasy Award among many other honors. Because of this distinguished record, we named Eyes Like Leaves one of our four top seeds in the Winter 2012 Battle of the Books.

Eyes Like Leaves is high fantasy, combining Celtic and Nordic mythology, as mages in the "Green Isles" attempt to defend their land against Viking invaders and the dark presence supporting them. The book has an odd publication history. Charles de Lint wrote it in approximately 1980, before his novels began to sell. Eyes Like Leaves eventually sold to Ace Books, but de Lint and Ace decided not to publish it, focusing instead on his urban fantasies in a contemporary setting. This proved a successful strategy for de Lint's career, but resulted in Eyes Like Leaves falling by the wayside. Subterranean finally published a limited edition hardcover of the novel in 2009, which I never saw, so I decided to allow Tachyon's 2012 trade paperback edition into the Battle of the Books.

The Battle: Both When We Were Executioners and Eyes Like Leaves are secondary world fantasies written in a literary style, and both open with a series of flashbacks. Both authors strive to write in an elegant fashion, but in When We Were Executioners, McDermott's efforts at stylish writing often fall flat. He has, for instance, an unfortunate habit of repetition -- the opening line of the book, "I dream of dead men," is repeated five times in the first four pages, and it's just not a good enough line to carry that off. McDermott's choice of language tends to come across as self-conscious. Here is the first-person priestess, waking from a night of dreaming memories from Jona's skull:

I stretched. I walked into the early dawn. "I'm getting breakfast."

My husband ran on ahead into the forested places down the side of the little mountain.

I paused to watch the sunrise. Every hill is a mountain dying or being born; every mountain is a hill upon a hill upon a hill. From where I stood, I could see over the trees to a rising sun. It looked like the hills were on fire.

I started a fire of my own. Without the wolfskin on my back I was cold, but I had human hands, and I could build fires. My husband yawned awake, flashing his predator teeth.

I don't understand what "Easier like this" means -- it's easier to get breakfast as a wolf? The bit about how "every mountain is a hill upon a hill upon a hill" is working hard to sound profound and not getting there. And how could her husband yawn awake, when we just read that he "ran on ahead"? Perhaps that's meant to suggest the passing of many days blending together, but if so it was unclear to me and interrupted the flow of my reading.

In contrast, de Lint's writing is elegant, but in a way that flows smoothly, serving the story rather than distracting from it. His use of language is superb right from the opening page, when our protagonist Tarn flashes back to when an old wizard announced that he wanted Tarn, then a street urchin, as his apprentice:

"The reasons are unimportant. Are you willing to learn what I can teach you? It won't be an easy task."

"I'll try, but . . ." Tarn met the greybeard's clear-eyed gaze. "Are you sure you haven't mistaken me for someone else?"

"When will we begin?"

The tree-wizard smiled. "We have already begun."

They left Tallifold that day, journeying north to where autumn touched the summer woods of Avalarn. The wind teased their cloaks with curious fingers. The sky dreamed blue above them. The woods whispered wise about them.

The line, "We have already begun," is simple but wise, in just the way McDermott attempted and failed with "hill upon a hill upon a hill." The bit where "the sky dreamed blue" is a better turn of phrase than I found anywhere in 25 pages from McDermott.

One advantage When We Were Executioners has over Eyes Like Leaves is an interesting ambiguity. After 25 pages of When We Were Executioners, I have no idea whether my sympathies should be with the demon-hunters or the demon-tainted, and I'm not sure there would be a clear answer even if I had read the preceding volume. In contrast, Eyes Like Leaves presents a standard good-against-evil conflict. I suspect this difference has much to do with when the books were actually written. In 1980, when de Lint was writing his novel, good-against-evil was generally how high fantasy was done; today, readers expect more shades of gray.

But this is not enough to overcome my preference for de Lint's skillful writing. Most importantly, de Lint's clever language always drew me into the story, instead of snapping me out of it as McDermott's often did. Perhaps When We Were Executioners suffers from being the middle book of a trilogy, especially since I haven't read the first book, but I did not regret putting it down after 25 pages, while I very much wanted to continue further into the story of Eyes Like Leaves.

Eyes Like Leaves will advance to meet either The Isis Collar by Cat Adams or The Scar by Sergey & Marina Dyachenko in the second round.

To see the whole bracket, click here.
Posted by Fantastic Reviews at 3:37 PM