Battle of the Books, Winter 2012, First Round :: Gamers by Thomas K. Carpenter vs. Shadows in Flight by Orson Scott Card 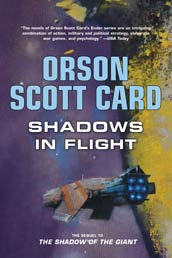 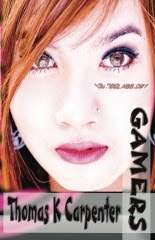 Our third match of the Winter 2012 Battle of the Books pits Gamers by Thomas K. Carpenter against Shadows in Flight by Orson Scott Card. These are both science fiction novels with a YA feel -- Gamers is expressly marketed to young adults, while Card's Ender books have been hugely popular with younger readers. The winner of the match will be the book I most want to continue reading after finishing 25 pages of both.

Gamers: Black Moon trade paperback, 2011, 313 pages, cover art by Atikarn Matakangana. This is a 2011 release but I exercised my discretion to bend the eligibility rules to get it into the Battle of the Books, because: (i) I never saw Gamers in 2011 -- as an independent book, it didn't get much circulation; (ii) Thomas K. Carpenter is one of the good people who hang around the Writers of the Future forum; and (iii) I dig the cover art -- although in our scan you may not be able to see the nice detail in the eyes. But it seems I didn't do Carpenter any favors by slipping him into the BOTB, since the luck of the draw placed his novel opposite a fellow named Orson Scott Card.

Gamers is set in a future where pretty much everything you do in life is part of a huge game, and your score is always rising or falling. You can see the score at all times, as part of the constant virtual reality overlay to your senses. Our heroine Gabby DeCorte is a talented teenager who can hack the game to alter what people around her are seeing. In the opening scene she uses that skill to help her friend Zaela, whose score may not be strong enough to put her on the right path after high school. Then Gabby learns that mysterious and powerful figures have taken an interest in her abilities.

Shadows in Flight: Tor hardcover, January 2012, 237 pages, cover art by John Harris / Macmillan audio, 7 hours, narrated by Stefan Rudnicki and cast. Orson Scott Card is one of the all-time greats of science fiction and fantasy, and it's a no-brainer to designate his latest novel as one of our four seeded books. Card is the only author ever to win both the Hugo and Nebula Awards for Best Novel in consecutive years, with Ender's Game and Speaker for the Dead. Ender's Game has probably been the most important gateway to science fiction for teenagers since Robert Heinlein's juvenile books. And I think Speaker for the Dead is even better -- it remains one of my all-time favorite novels.

While Card's books still sell well, a large segment of science fiction fandom has turned away from him due to his outspoken views on political and religious issues. I disagree with him about gay marriage too, but I can't bring myself to pretend he's not an outstanding writer.

Shadows in Flight is the latest volume in the hugely successful Ender universe. A series of these books (the Shadow books) have followed Ender's lieutenant Bean. A genetic condition called Anton's Key is the reason Bean is a genius, but it has also caused him to grow abnormally, from an unusually tiny child to a giant of a man. His body cannot sustain the growth, and he has not much longer to live. And three of his children share his gift/affliction. He has taken them on a long trip in a near-lightspeed spaceship, in hopes that through the resulting time dilation, future centuries of medical advances on Earth will lead to a cure of their condition. In the opening chapter, we see that the three children (Ender, Carlotta, and Sergeant) have grown into incredibly precocious six-year-olds, with an extreme sibling rivalry emerging between the boys. Unfortunately, because no one left on Earth shares their condition, serious research on Anton's Key has ceased.

The Battle: I want to first emphasize that Gamers has a solid opening. The writing flows well (far better than your typical self-published book), the strange half-VR world is interesting, and the teenage characters should be easily accessible to younger readers.

But at the end of 25 pages (actually I cheated and read through page 36 because the print is large), I didn't feel the sort of compulsion to continue reading that I did after a chapter of Shadows in Flight. An author like Orson Scott Card hooks you quickly, and he makes it look easy, so it's hard to put a finger on what he's doing right that a less accomplished writer isn't. Let's try comparing the settings and characters of these two books.

Setting. Carpenter has created an interesting world, where everything you experience is part of a meta-game. But it doesn't pop. This is a high-tech future that should come across as truly bizarre, like a Charles Stross story. Instead, it mostly feels pretty normal, just a couple teenage girls going to school and then hanging out. Carpenter needed to pick certain moments to bring home the strangeness of this future world -- moments when everything changes in disorienting fashion. Instead, an early scene in the book takes his characters to a dusty library, a comfortable and familiar setting to most readers, just the wrong effect.

Card's setting is also interesting, albeit much simpler. The important thing here isn't the spaceship our characters are on, but why they're on it. Even if you haven't read the other Shadow books, within a few pages you understand that Bean, aka the Giant, is doomed from his genetic condition. His children know he's doomed and that they have the same condition, and while they put on brave faces, they have no idea what to do about it. Even worse, their father's great size and expected death have distanced the children from him. Card's set-up places his characters in a terrible dilemma, one that is so simply and clearly explained that no reader could fail to appreciate it.

Characters. Much of the first chapter of Shadows in Flight is straight dialogue, yet it's dialogue that gives us a strong sense of who these characters are. Here are two of Bean's children, Ender and Carlotta (both named for characters in prior books), discussing Ender's analysis of Earth medical research:


"I connect things that the humans could never see."

"Our children won't be, if I can help it," said Ender.

"'Our children' is a concept that will never have a real-world example," said Carlotta, "I'm not mating with either of my male sibs, which includes you. Period. Ever. It makes me want to puke."

"The idea of sex is what makes you puke," said Ender.

These are brilliant young people, with an understanding of concepts such as sex that goes far beyond their years, yet they're also children who get the heebie-jeebies at the notion of sex. Card has always had a knack for portraying such gifted children. We don't get as much sense of Sergeant in the opening pages -- so far, he just seems like the same character as Peter in Ender's Game -- but Carlotta and this new Ender demonstrate that Card remains a master at using a few words of dialogue to reveal his characters' personalities.

In contrast, the dialogue in the opening of Gamers is pretty much just talk. We hear some unfamiliar slang, but nothing particularly revealing about what makes these characters tick. Similarly, their behavior doesn't reveal their personalities. This is a missed opportunity, for we learn only three pages in that Gabby can hack the VR overlay on the world all around them, i.e., she can just make stuff appear whenever she wants. Excuse me, but how fucking cool is that? She should be the queen of the world, or at least of her school. Has that gone to her head and made her a spoiled bitch? Or is she the super-cool future version of Ferris Bueller? I feel I should know the answer by now, but I don't.

All of which is not at all meant as a slam against Thomas Carpenter, just my observations of some of what makes Orson Scott Card a great author, while new writers like Carpenter and me are still working to figure it out.

Shadows in Flight will advance to the second round, to meet either Nathan Long's Jane Carver of Waar or Sisterhood of Dune by Brian Herbert & Kevin J. Anderson.

Excuse me, but how fucking cool is that?

I was reading along, enjoying your blog until this came along.

Then I loved your blog.

It's not just the swear word, but that you really meant it. Are people afraid to chase away readers with an F bomb? Not you. Excellent.

Thanks, Dustin! Both for the kind words and for the ammunition to use next time my fellow Fantastic Reviewer Amy tries to talk me out of an f-bomb.

Thanks again for letting me be a part of your contest, I enjoyed the analysis.

PS - And the cover designer, my wife, thanks you for your kind comments about her design. The original cover designer flaked and she made that cover in a forty-five hour designing binge over three days. When it was done, she was a puddle on the floor, but I had this spectacular cover that exceeded my expectations.

Thanks for sending us your book, Thomas, and for receiving the result so graciously. And you're right -- your wife did a fantastic job with the cover.

Hey, Aaron. Notice I didn't comment on that f-bomb? I thought that was a proper, if you can call it that, instead of gratuitous, use of one.

Yes, I appreciate that you let them go sometimes. ;)