Battle of the Books, Winter 2012, First Round :: Jane Carver of Waar by Nathan Long vs. Sisterhood of Dune by Brian Herbert & Kevin J. Anderson 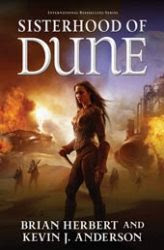 Our fourth Battle of the Books contest pits Jane Carver of Waar by Nathan Long against Sisterhood of Dune by Brian Herbert and Kevin J. Anderson. Which book will I most want to continue reading after the first 25 pages?

Jane Carver of Waar: Night Shade trade paperback, March 2012, 299 pages, cover art by Dave Dorman. Nathan Long has written for Hollywood and done ten novels in the Warhammer universe. Jane Carver of Waar is his first original, non-media novel. As the cover and the name "Jane Carver" suggest, this is a book in the style of Edgar Rice Burroughs' John Carter of Mars novels.

Long's hero Jane Carver is a biker chick and former Airborne Ranger (picture a modern-day Xena with red hair). In the opening pages she kills a guy without really meaning to -- he gropes her and she expresses her displeasure more forcefully than she intended -- and is quickly on the run from the law. She finds a cave to hide in, and next thing you know she's on an alien world inhabited by strange purple creatures.

Sisterhood of Dune: Tor hardcover, January 2012, 496 pages, cover art by Steve Stone. Brian Herbert, the son of Frank Herbert, has written several original novels but is best known for his new work in his father's Dune universe, in collaboration with Kevin J. Anderson. Kevin J. Anderson is the hardest working man in science fiction. He writes prolifically, dividing his time between Star Wars and other media tie-in work, Dune books with Brian Herbert, and original work, both solo and in collaboration. I confess to a bias in Anderson's favor, since he and his wife Rebecca Moesta have been extremely generous with their time to all us humble Writers of the Future winners.

Sisterhood of Dune is a Dune prequel. If you've been following the Brian Herbert / Kevin J. Anderson additions to the Dune universe, Sisterhood is presumably the first in a new trilogy, set after the Legends of Dune Trilogy (The Butlerian Jihad, The Machine Crusade, and The Battle of Corrin) and before the Prelude to Dune Trilogy (House Atreides, House Harkonnen, and House Corrino). It focuses on the formation of the key groups that played such an important role in Frank Herbert's books, such as the Bene Gesserit (the "Sisterhood" of the title), the Mentats, and the Spacing Guild.

The Battle: If I've counted right, Sisterhood of Dune is the 17th novel in the Dune universe, including Frank Herbert's original six books and the Brian Herbert / Kevin Anderson novels. So Sisterhood is geared to a specific readership, people who never tire of Dune books. I don't mean that to sound negative. Frank Herbert created a universe so rich and fascinating that it's not surprising some folks just can't get enough of it. I am at a loss to understand the view I've occasionally heard expressed that there is something unseemly about doing so many Dune prequels and sequels. Brian Herbert and Kevin J. Anderson are writing books that a lot of readers out there want to read, which is what professional authors do.

It is very much to Herbert and Anderson's credit that the opening of Sisterhood of Dune does not read like an appendix to Frank Herbert's books. It just reads like a novel, about interesting characters with difficult problems. So we meet Raquella Berto-Anirul, founder of the Bene Gesserit and its first Reverend Mother. She desperately wants a successor, but every woman who attempts to duplicate her feat of taking control of her own biochemistry to overcome poisoning dies in the attempt. Should Raquella continue to sacrifice bright young women, or abandon the hope of creating fellow Reverend Mothers? (This is a dilemma clearly implied but not directly addressed in Dune, an example of how clever Herbert and Anderson have been in choosing the issues to flesh out in their books.) At the same time, Raquella has determined the Bene Gesserit's goals will require computer technology, which will inevitably place them in conflict with the anti-machine Butlerians, whose leader we just met in the previous chapter. This all makes for interesting reading, despite the necessarily extensive backstory.

Turning to Jane Carver of Waar, this is billed as a parody of the Edgar Rice Burroughs style of planetary adventure, but it doesn't strike me as parody so much as pastiche. Long is imitating Burroughs, not making fun of him. Except for the tough female protagonist and the modern language, this stuff easily could have been written by Burroughs himself. Here, for instance, is a scene where our heroine has been captured by tiger-striped centaur creatures:


I was barely conscious. The endless pounding gallop had jumbled my brains to cream of wheat, so I only got impressions: trees like droopy palms hanging over the creek, a sea of leather tents spreading to the canyon walls, the smell of meat and shit, pony-sized cen-tiger kids and cen-tiger chicks with four boobs to go with their four arms trotting alongside the column staring at us, the feel of cool air as we left the dry dust of the plains.

This seems to be the point of the book: imagining how Edgar Rice Burroughs would sound if he had used terms like "shit," "boobs," and "cream of wheat." Humor is a subjective thing, so your mileage may vary, but it doesn't do much for me. Instead of reading further in Jane Carver of Waar, I'd be more inclined to dig up Michael Moorcock's Kane books or Leigh Brackett's Skaith series; better yet, I could just read some Edgar Rice Burroughs.

THE WINNER: SISTERHOOD OF DUNE by Brian Herbert and Kevin J. Anderson

Sisterhood of Dune will move on to meet Orson Scott Card's Shadows in Flight in the second round.

To see the whole bracket, click here.
Posted by Fantastic Reviews at 2:24 PM

Damn. And I was hoping to go toe to toe with Orson Scott Card.

Sorry, Nathan, no hard feelings, I hope. Thanks for dropping by!

No hard feelings, though I will say that for me, the point of the book was not to put curse words into an ERB story - fun as that was - but to put a flawed, fully-rounded human being into the hero role, instead of a one-dimensional square-jawed superman.

Maybe when you finish the bracket you can read the rest of it and let me know if I succeeded.

We're having fun with this new format, but I will readily concede its biggest drawback: it requires me to make snap judgments about books without knowing where the author is going with the initial set-up, and without the benefit of later character development.

My pleasure. Looking forward to seeing who wins.