Battle of the Books, Spring 2012, First Round :: Forbidden by Syrie & Ryan M. James vs. Tempest by Julie Cross 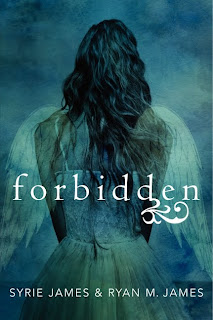 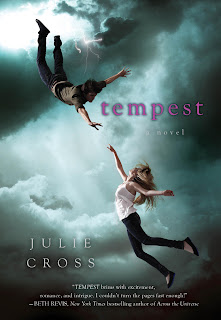 Our first matchup of the Spring Bracket of the 2012 Battle of the Books pits Forbidden by Syrie & Ryan M. James against Tempest by Julie Cross. Per our contest rules, I have read the first 25 pages of both, and the winner will be the book I most want to continue reading.

Forbidden: HarperTeen trade paperback, January 2012, 412 pages, cover photo by Howard Huang. Syrie James is the author of four previous novels, including The Memoirs of Jane Austen and Nocturne. Her son Ryan is a screenwriter and video game editor. This is their first collaboration.

Forbidden is the story of the forbidden love between Claire Brennan and Alec MacKenzie, students at a posh private high school in Brentwood, California. Through 25 pages there are only hints to why their (anticipated) love is forbidden. Claire doesn't know who her father was, and she has moved frequently for unknown reasons of her mother's. Alec is recently arrived from Scotland, with intentions to start living a more normal life, but we don't yet know what he was doing before. The book jacket suggests that the mysteries have to do with fallen angels, with Claire and Alec unwittingly on opposite sides of an ancient conflict.

Tempest: Macmillan audio, 9 CDs / St. Martin's hardcover, 334 pages, January 2012, cover photo by James Porto. Tempest is the debut novel of Julie Cross, first in a projected trilogy. This is the first book submitted to the Battle of the Books in audio format. I like the narration by Matthew Brown, particularly his nerd-nasal speaking voice for the character Adam.

College student Jackson Meyer, the protagonist of Tempest, has the ability to travel through time. But he can only go into the past, not the future, and only a few hours back. So, he says, he can't go back and kill Hitler or anything important like that. As the story opens, Jackson has finally confided his ability to his friend Adam, and they have begun some experiments to study Jackson's talent. Jackson has not yet told his girlfriend Holly about it. Then two strange men arrive at Holly's dorm room, dropping hints that they know about Jackson's ability. In the ensuing struggle, Holly gets shot, just before Jackson jumps back a full two years in time. The book cover tells us he will be trapped there, unable to return to his proper place in time.

The Battle: Aside from putting one "seeded" book in each quarter of the draw, the entire Battle of the Books draw is completely random. But fate seems to enjoy pairing similar books. Forbidden and Tempest are both young adult novels combining elements of fantasy and romance, a subgenre that has become quite crowded since the success of Twilight. The nice thing is, pairing these two books together makes it irrelevant whether I personally am a fan of this subgenre.

Forbidden and Tempest both bring the supernatural elements of the story into play quickly. Tempest begins with the protagonist Jackson and his brainy friend Adam doing tests to figure out exactly how his time traveling ability affects reality. Forbidden is more circumspect about what's going on -- so far there are only vague hints about the two main characters' backstories -- but Claire has two premonitions that clearly signal that she has clair(nudgenudge)voyant abilities. In both cases, the reader is immediately engaged in the supernatural aspect of the story.

So this battle comes down to who has me interested in the romantic side of the tale. In the opening scene of Forbidden, Claire bumps into the new boy, Alec. In Hollywood, they call it a "meet cute," where the two lead characters' first meeting leaves the audience wanting to see them together. But in this case the meet lacks much cute -- there's just nothing remarkable about the Claire-Alec meeting. She instantly dislikes him (typical in a meet cute) but for no real reason, and she changes her mind within minutes. Meanwhile, he is instantly attracted to her, but it's hard to see why. From his point of view, we are told that "she radiated intelligence, confidence, and vulnerability," but she hasn't said a word to suggest any of those things.

I find the dialogue in Tempest between Jackson and his girlfriend Holly much more charming:


Her face relaxed and she tugged on the front of my shirt, pulling me closer before kissing my cheek. "So . . . what are you doing tonight?"

"You're so full of it." She laughed and shook her head. "I can't believe you forgot your promise to spend an entire evening with me reciting Shakespeare . . . in French . . . backwards. Then we were supposed to watch Titanic and Notting Hill."

Whether they're kissing or arguing, there is much more on-page chemistry between Jackson and Holly than between Claire and Alec. Overall, the characters in Tempest and their interactions feel more real to me through the opening chapters, and I want to read (or listen to) more about them.

THE WINNER: TEMPEST by Julie Cross

Tempest will advance to meet either Hell Train by Christopher Fowler or Greatshadow by James Maxey in the second round.

To see the whole bracket, click here.
Posted by Fantastic Reviews at 2:42 PM