Battle of the Books, Spring 2012, First Round :: Everyone Loves a Good Train Wreck by Eric G. Wilson vs. The Stolen Bride by Tony Hays 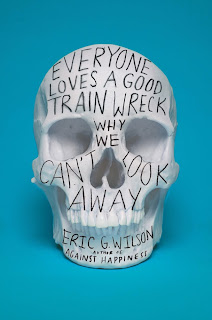 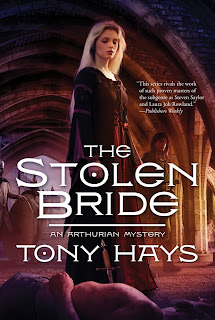 The Spring 2012 Battle of the Books continues with Everyone Loves a Good Train Wreck by Eric G. Wilson against The Stolen Bride by Tony Hays. As always, the book I most want to keep reading after the first 25 pages will advance. This is an unusual matchup, featuring the two books in this bracket that are not science fiction, fantasy, or horror. Everyone Loves a Good Train Wreck is non-fiction, but on a topic we thought would be of interest to genre readers; The Stolen Bride is mystery, but with an Arthurian setting we figured genre readers would appreciate.

Everyone Loves a Good Train Wreck: Farrar, Straus and Giroux hardcover, February 2012, 210 pages, cover photo by Simon Lee. A Wake Forest professor of English, Eric G. Wilson has written seven previous non-fiction books, including Against Happiness: In Praise of Melancholy and The Mercy of Eternity: A Memoir of Depression and Grace.

Everyone Loves a Good Train Wreck, subtitled Why We Can't Look Away, examines why so many of us are fascinated by terrible things: grisly highway accidents, morbid horror movies, etc. In short, easily digested chapters, Wilson considers this issue through personal anecdotes and quotations from authors in a wide range of disciplines.

The Stolen Bride: Tor/Forge hardcover, April 2012, 344 pages, cover art by Steve Stone. Tony Hays is an international journalist who also writes historical mysteries. The Stolen Bride is the fourth in his series of mysteries during the days of King Arthur. But the books are not fantasies——Hays assumes the Arthur legends were based on real people and places his stories in a historically accurate early medieval setting.

The narrator of The Stolen Bride is Malgwyn ap Cuneglas, a counselor of Arthur, who respects the King (or rather, the Rigotamos) but also resents him for saving Malgwyn after he lost an arm in a battle against the Saxons. In Malgwyn's view, Arthus wrongly deprived him of a noble death and left him a cripple. In the opening scene, while traveling through a region of the kindgom in turmoil, they find a village slaughtered by unknown forces. The only survivor is a young blonde woman named Daron. With her help, Malgwyn determines to find those responsible.

The Battle: A non-fiction book against a historical mystery. Isn't that an apples-to-oranges comparison? you ask. Well, yes. Yes, it is. And at Fantastic Reviews, we like apples-to-oranges comparisons. For the record: apples. Apples are better because they're not too sweet, have a satisfying crunch, and don't leave you with a mouthful of pulp you're not sure whether to swallow or spit out. We like apples better, and you should too.

Let's start with the mystery novel. I do read mysteries from time to time, but there has to be something more than the whodunit to keep me interested. Part of the appeal of The Stolen Bride is the historical setting, but so far the characters are hanging out in nondescript forests, and Hays hasn't given me much sense of time and place. And his writing style leaves me cold. Here, for instance, Malgwyn is trying to question Daron, the only witness to the slaughter he is investigating, but her eyes glaze over:


I did not know what she was seeing in the darkening forest; perhaps her mind was taking her back to that horrific event of which she spoke.

"Master?" Sulien was at my side. "If we are to reach Celliwic tonight, we must leave soon."

I nodded. There was little more I could learn here. "Very well." Standing, I felt a tug at the bottom of my tunic.

"You will leave me?" Poor Daron. To leave her in this village of death was punishment.

The stilted language ("of which she spoke") is supposed to make this feel like olden times, but mostly it just annoys me. And in modern times or old, nobody should have to puzzle out why a woman who just watched her husband, family and friends all killed might be a bit distracted. It's similarly unnecessary to spell out that leaving her in the destroyed village would be a punishment.

Everyone Loves a Good Train Wreck also has a ponderous opening. Wilson couldn't decide between four different introductions to frame his central question, so he used them all: Chapter 1——Why was I so fascinated with the 9/11 footage? Chapter 2——Why do I rubberneck at highway accidents? Chapter 3——Why do I study gothic and morbid subjects? Chapter 4——Why am I generalizing to other people from myself? The only insights in these chapters are tucked away in the endnotes.

Thankfully, Wilson hits his stride after that, beginning with an anecdote of how his brother and a friend once freaked him out with a silly homemade horror film, dredging up disturbing images and desires. (He notes that his brother and his friend later collaborated on the Troma vampire film Drawing Blood.) From there, he generalizes to "the awkward split——one that most of us suffer——between socially acceptable façade and interior strangeness":

Poe calls this urge for destruction the "imp of the perverse." Imagine, he asks, standing on the brink of a precipice. "We peer into the abyss——we grow sick and dizzy. Our first impulse is to shrink from the danger. Unaccountably we remain."

Why do we keep staring over the brink? Any fan of horror stories or apocalyptic fiction has to be interested in the answer.

THE WINNER: EVERYONE LOVES A GOOD TRAIN WRECK by Eric G. Wilson

Everyone Loves a Good Train Wreck advances to the second round, to face Ben Marcus's The Flame Alphabet.

To see the whole bracket, click here.
Posted by Fantastic Reviews at 11:00 AM