Battle of the Books, Spring 2012, First Round :: Hell Train by Christopher Fowler vs. Greatshadow by James Maxey 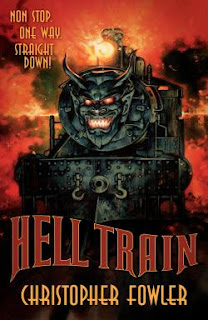 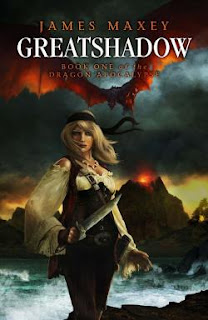 Our second match of the Spring Bracket of the 2012 Battle of the Books pits two new Solaris titles against each other: Hell Train by Christopher Fowler vs. Greatshadow by James Maxey. The winner will be the book I most want to continue reading after the first 25 pages.

Hell Train: Solaris paperback, January 2012, 319 pages, cover art by Graham Humphreys. Christopher Fowler has published some thirty books, mostly horror novels and collections, but also the Bryant & May series of mystery novels. He is a five-time winner of the British Fantasy Award, including best novel for Full Dark House, and has been nominated for the Stoker Award, World Fantasy Award, and others. Based on this impressive track record, we named Hell Train one of the four "seeded" novels for the Spring 2012 Battle of the Books.

Hell Train is a horror novel paying tribute to the glory days of Hammer Films. The novel opens in 1966, when Hammer was beginning to lose the momentum from The Curse of Frankenstein and Horror of Dracula, and was looking for a new hit. Screenwriter Shane Carter receives an assignment to write the next Hammer film, but he has only five days to do it. The producer Michael Carreras (an actual Hammer producer) suggests something about a train. As Carter wanders the Hammer studio, his eyes fall on a board game called "Hell Train." In the second chapter, a young girl finds the same game in her attic, but gets more than she bargained for when she begins to play. The third chapter takes us to Europe during World War I, where a British con artist has arrived by train at a mysterious village. We don't know how these scenes connect yet, but one suspects that the girl and/or the con artist are actually characters in the movie Shane Carter is writing.

Greatshadow: Solaris paperback, February 2012, 416 pages, cover art by Gerard Miley. Greatshadow is the first in The Dragon Apocalypse series. James Maxey has written a previous fantasy trilogy with dragons, the Dragon Age series--Bitterwood, Dragonforge, and Dragonseed--as well as the superhero novels Nobody Gets the Girl and Burn Baby Burn and a collection of short fiction called There Is No Wheel.

Talk about in media res, Greatshadow begins with the first-person narrator being thrown out a 500-foot-high window, and the action never slows after that. But Maxey still manages to give us a feel for his main characters. Our narrator is the devoted sidekick of the superhuman warrior woman Infidel. Surprisingly, the narrator does not survive the first 25 pages, yet his disembodied spirit continues to tell the tale. Hints have been dropped that the story will involve Infidel attempting to rob an immensely powerful dragon of its treasure.

The Battle: Both of these novels have strong openings. Greatshadow hits us with action from the first paragraph, quickly setting the stage for what promises to be very fun reading. Hell Train builds up a bit more slowly, but that's because the story is modeled after the style of the old Hammer horror films. I absolutely love how the first chapter, in which our protagonist arrives at the Hammer studio, is itself like a typical Hammer movie: the studio is in a secluded mansion, oddly quiet, where our hero meets a beautiful but enigmatic woman, while subtle hints of strangeness add to the gothic feel.

I try to be as objective as I can with the Battle of the Books, but sometimes you have to surrender to your biases. I love the old Hammer films (even the bad ones), and the concept of a horror novel in the Hammer style about the making of a Hammer movie is very appealing to me. A fantasy novel about stealing treasure from a dragon just doesn't have the same appeal. That's an admittedly subjective reaction, and if you love dragon books, I am sure Greatshadow will be well worth your time. But for me, I want to spend that time with Christopher Lee and Peter Cushing.

Hell Train advances to take on Tempest by Julie Cross in the second round.

To see the whole bracket, click here.
Posted by Fantastic Reviews at 11:30 AM

Hammer films didn't ring a bell with me, but that isn't surprising because I'm not truly much of a genre media fan.

Upon looking up Hammer films, I learned that the 1965 version of She (based on the novel by H. Rider Haggard) was made by Hammer Film Productions. The movie stars Ursula Andress, Peter Cushing and Christopher Lee. I’ve seen it, although I'm not sure I'd recommend it.

I just felt my fist raised and a great cry of YES! burst forth as I got through Round One. Thank you!

You're very welcome, Mr. Fowler, and thanks for dropping by!