Battle of the Books, Spring 2012, First Round :: The Flame Alphabet by Ben Marcus vs. The Burning Man by Mark Chadbourn 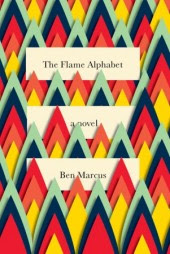 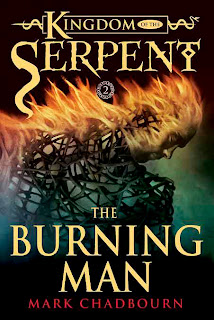 Moving into the bottom half of the bracket, the Spring 2012 Battle of the Books continues with The Flame Alphabet by Ben Marcus against The Burning Man by Mark Chadbourn. The winner will be whichever book I most want to keep reading after the first 25 pages.

The Flame Alphabet: Alfred A. Knopf hardcover, January 2012, 289 pages, cover design by Peter Mendelsund. Ben Marcus is a highly regarded mainstream author. His three previous books, Notable American Women, The Father Costume, and The Age of Wire and String, have included elements of surrealism, but The Flame Alphabet is his first outright science fiction or fantasy novel (even if you won't find it in the science fiction section of the bookshop).

The Flame Alphabet is set in a near-future society that is quickly breaking down due to a strange epidemic that has made children's speech toxic to their parents. The book opens with our narrator Sam and his wife Claire making the terrible choice to abandon their teenaged daughter Esther to save themselves. The rest of the opening 25 pages consist of flashbacks to when they first fell ill, and their gradual realization that the source of the illness was their own daughter.

The Burning Man: Pyr trade paperback, April 2012, 390 pages, cover art by John Picacio. Mark Chadbourn is a British fantasist, who has published some 15 novels since 1992 and twice has won the British Fantasy Award. First published in England in 2006, The Burning Man is the second in the Kingdom of the Serpent trilogy, which is related to Chadbourn's prior trilogies, The Age of Misrule and The Dark Age. The Burning Man is the sequel to Jack of Ravens, which fell in the first round of the Winter 2012 Battle of the Books. No shame in that——it lost to Elizabeth Bear's Range of Ghosts, which went on to win the entire bracket.

(Spoilers to Jack of Ravens follow.) As summarized in a ten-page synopsis at the outset of the book, the protagonist of this series is Jack Churchill, who has appeared at various points in history as a "Brother of Dragons," battling evil forces led by his former friend Ryan Veitch. In the novel's prologue, Jack and some friends——including his wife Ruth, with whom he was reunited in the previous volume——collect some fellow Brothers and Sisters of Dragons, who had been lost without their memories in an alternate universe. Meanwhile, Ryan Veitch is resurrected after seemingly dying in the previous volume.

The Battle: The Flame Alphabet has a strong and original premise, even if there are some precedents: Octavia Butler's "Speech Sounds" also showed a society breaking down due to a failure of language, Chuck Palahniuk's Lullaby previously handled the concept of unwittingly harming the people around you with words. The initial scenes strike me as tedious at times, as Marcus persistently repeats himself, straining for an impressive-sounding effect. (I often have this reaction when mainstream writers try to do science fiction, although thankfully with some exceptions, such as Kazuo Ishiguro's Never Let Me Go.)

For me, the saving grace in The Flame Alphabet so far is the dialogue, which quickly reveals the personalities of Sam and Ruth and their acerbic daughter Esther, while also framing the metaphoric import of the story. In an early scene, Marcus introduces the theme of language as weaponry, when Sam shows Ruth a timeline for their getaway:


"You actually wrote this down," she finally said, her voice hollowed out through the mask.

A statement and not a question. Some essential marital weaponry from the arsenal of not giving an inch. Verbalize someone's actions back to them. Menace them with language, the language mirror. Death by feedback.

"It's a suggestion," I said, in the bedside voice I'd adopted as her caretaker.

Claire gave the timeline back to me and turned away.

"Unbelievable," she whispered. "I hope you're enjoying yourself."

In his flashbacks, Sam analyzes how they could have reached the point of leaving Esther to fend for herself, when at the initial outbreak they had vowed "we would love our daughter no matter what. How ridiculous to think otherwise. Ridiculous. It was so easy to agree to what did not test us." The opening 25 pages end with a terrific passage of dialogue (too long to quote) between all three characters, displaying Ruth's sarcasm, which is amusingly witty but has a withering effect on her parents.

Turning to The Burning Man, usually it's a handicap to enter the Battle of the Books as a sequel, but this time I think it's oddly helpful. The opening of the previous volume, Jack of Ravens felt a bit aimless to me, while this book's initial prologue gives welcome context and a nicely dramatic feel from the opening lines:


My name is Jack Churchill, known to my friends as Church, and I am only a man. This is a story of gods, and powers higher than gods. I write these words in my head, and thus on a page, and thus throughout all Existence, as I stand here, at the end of the world.

From the first day that I accepted my role as a Brother of Dragons, I have struggled long and hard. At the time I didn't understand the full nature of the responsibility thrust upon my shoulders. Now I do.

That's solid epic fantasy fare. Still, I confess I am wearying of multi-volume fantasies about nice guys trying to preserve goodness and light against the forces of badness and dark. Reading of Jack and his companions racing through a building from a gazillion angry spiders (which he knew perfectly well would be there) feels to me like watching friends play a spirited role-playing game. It's all in good fun. There will be adventures and battles, characters killed (but some will come back after a saving throw), possibly a winner (probably not), but tonight's game will be not much different from last week's.

From the opening pages, it seems to me that Ben Marcus has something more interesting to say with The Flame Alphabet, and I'd like to see where he decides to take his novel's concept.

THE WINNER: THE FLAME ALPHABET by Ben Marcus

The Flame Alphabet moves on to the second round, to face either Everyone Loves a Good Train Wreck by Eric G. Wilson or The Stolen Bride by Tony Hays.

To see the whole bracket, click here.
Posted by Fantastic Reviews at 3:20 PM