Aaron's Story Recommendation of the Week :: Gastrophidia by Nathaniel Lee 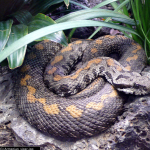 The Story Recommendation of the Week is for Gastrophidia by Nathaniel Lee, from the September 2012 issue of Ideomancer.

"Gastrophidia" is about a fellow named Hurley, who has a snake in his belly. Specifically, a viper. Sharing his body with a snake gives Hurley a crotaline perspective on things; for instance, he likes his tiny apartment because he thinks of it as a den——no sense having more space than you need.

The snake emerges at night, although perhaps Hurley is dreaming:

It slipped along Hurley’s pock-marked skin, brushing against him with the susurrus of scales on flesh. It was warm from its time inside him, and he felt it coil down one leg and up the other with a tingling shudder. Its feathery tongue danced along the sensitive skin along his side, down his thighs, on the bottoms of his feet, and Hurley clenched himself tight in an agony of glee, unwilling to twitch or flail and risk injuring the snake. It lay itself along the length of Hurley’s body, its tail-tip wrapped around one ankle, its blunt, blood-slick snout next to Hurley’s ear, and began to sing to him. The snake had a woman’s voice, deep and husky, and he could never quite recall the words to the song the next morning. Hurley knew, though, that the snake loved him and thanked him for his pains . . .

"Gastrophidia" is a short, fun story, but thought-provoking at the same time. It's well worth checking out. I also note that this is the third SROTW to come from Ideomancer, which consistently finds very interesting work from relatively new authors.

Nathaniel Lee, who sometimes shortens his name to Nathan Lee and other times expands it to Nathaniel Matthews Lee, has published short stories in such venues as Daily SF, InterGalactic Medicine Show, and Abyss & Apex. He seems to prefer writing at short lengths, and posts flash pieces at nearly a daily rate on his Mirrorshards site.
Posted by Fantastic Reviews at 11:00 AM

Nathaniel Lee is the default "writer" name. I think "Matthews" only shows up at places like Daily SF, where they ask for full name and I always forget to put in a "pen name" 'cause I don't think of it as that. :-D (Still, it distinguishes me from the 18th century playwright and that one dude on the IMDB.)

Yeah, that same-name business is part of the reason I went with my full name for fiction -- there is a soccer player out there named "Aaron Hughes," so no one would ever have much luck googling me under that name.