Aaron's Story Recommendation of the Week :: Your Cities by Anaea Lay 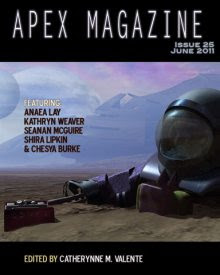 The Story Recommendation of the Week is for "Your Cities" by Anaea Lay. "Your Cities" first appeared in the June 2011 issue of Apex Magazine, but I didn't stumble across it until a year later. Luckily, it's recently been republished in audio form at Tina Connolly's Toasted Cake podcast, which gives me a fresh opportunity to recommend it.

"Your Cities" is set in a near future when cities have inexplicably started wandering about, trampling folks in their paths. The narrator addresses the tale to a former lover, who she(?) believes is somehow responsible for these bizarre occurrences. The lover vanished in New Orleans, just before that city awoke:

I’ve tried to picture it ever since, you strolling into a city anybody with any sense had long since fled. You whistled; I’m sure you whistled. But then what? Did you crawl into the city’s bed and stroke its shoulder, nibbling on its ear and whispering tidings of morning, the way you would for me? Did you wrap your arms around it and speak of love and sex and waffles, coaxing it past the foggy stages of fresh wakening and into the warmth of your voice?

In the space of only about 1500 words, Anaea Lay creates a wonderful mood to this piece, effectively using the collapse of our urban and suburban civilization to frame the narrator's personal loss. Who can't identify with a failed relationship that makes you feel like the whole world is crumbling?

I believe "Your Cities" was Anaea Lay's first professional sale, but she has since appeared in Penumbra, and has stories forthcoming at Strange Horizons, Apex (again), and Shock Totem. I met her at Worldcon and told her I liked this story——she adamantly denies instantly turning beet red, but her giddy tweet moments later about her first fan contact is a matter of public record. I believe Anaea will soon be winning over a great many more fans.
Posted by Fantastic Reviews at 3:36 PM