Battle of the Books, Summer 2012, Second Round :: Songs of the Earth by Elspeth Cooper vs. Taft 2012 by Jason Heller 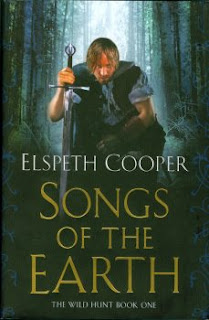 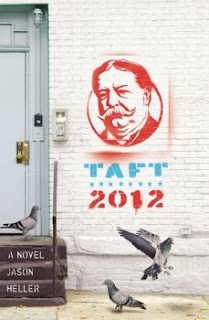 We continue the second round with Songs of the Earth by Elspeth Cooper versus Taft 2012 by Jason Heller. The book I most want to continue reading after 50 pages will move on to the semifinals.

Songs of the Earth: Tor Books hardcover, March 2012, 467 pages, cover illustration by JS Collaboration, Book One of The Wild Hunt. Elspeth Cooper is a UK writer. Songs of the Earth is her first novel.

In the first 25 pages, Gair, a novice Church knight with inborn magical ability, was found guilty of witchcraft. Gair was granted clemency, to the protest of Elder Goran, and sentenced to branding and banishment instead of death. A stranger, an older man named Alderan, helps Gair. Unfortunately, a witchfinder is already on Gair’s trail.

Gair must leave the parish by dusk. Alderan gives Gair back his lost clothes and sword. Gair and Alderan hurry, only to have their horses slowed by traffic near the city gate. Gair gets anxious. Later, in the hills near the parish boundary, the road is blocked by knights who are Goren’s men, and the witchfinder. Gair refuses to be taken. Gair and Alderan manage to outwit and pass through the other men.

Elsewhere, the Gatekeeper Masen learns that the Veil, the boundary between our world and the Hidden Kingdom, is weakening. He captures, using a magical net, a magnificent stag that a came through a Gate when running from a hunter on other side. Masen returns the stag to the Hidden Kingdom where it belongs.

In the first 25 pages, Former President William Howard Taft mysteriously appeared covered in mud at a White House press conference in 2011, almost a hundred years after he went missing. Secret Service agent Kowalczyk shot Taft in the leg. Taft's identity was confirmed by DNA tests and his knowing a secret presidential ID code.

Taft is moved to a secure DC apartment, designated Big Boy One. Agent Kowalczyk commands his security detail. Taft gets annoyed with history Prof. Susan Weschler. Congresswoman Rachel Taft (Ind.-OH) invites her great-grandfather to Thanksgiving dinner. Kowalczyk brings in a (Wii) game console so that Taft can play golf. Taft is recognized and mobbed like a rock star when walking toward the Library of Congress. Next time going out, Kowalczyk makes Taft incognito in T-shirt and baseball cap. Taft shares a table at a deli with an African-American woman.

The Battle: These books are very different in subject and tone. Songs of the Earth is a medieval-like fantasy with a powerful church and outlawed magic. Taft 2012 is a modern-day political satire about a former US President back after apparently hibernating for nearly a hundred years.

In Songs of the Earth, I really liked that magic was termed song and used by the power of will. I’m curious about the Hidden Kingdom, which seems peopled by fey or elves. But, on the other hand, I found it odd that Alderan would decide to ride with Gair, a convicted man, and leave the city. When Gair used his magic, I liked the special effects on Gair, but it didn't much alter the situation.

I liked the readability of Taft 2012. The inclusion of snippets from other media humorously added other points of view. Historical facts about Taft and his comments about our society were inserted interestingly. But not much really happened to advance a plot.

Both books are good in their different ways. I could have continued with either. But after some thought, I decided that I’d rather continue reading about former President Taft.

THE WINNER: TAFT 2012 by Jason Heller

Taft 2012 by Jason Heller will advance to meet The Coldest War by Ian Tregillis in the semifinals.

To see the whole bracket, click here.
Posted by Fantastic Reviews at 10:47 PM