Battle of the Books, Summer 2012, Second Round :: Age of Aztec by James Lovegrove vs. Silver by Rhiannon Held 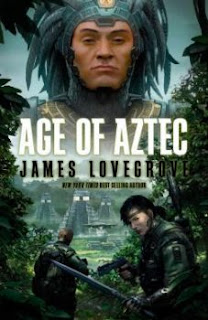 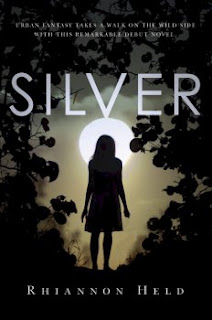 The second round of the Summer 2012 Battle of the Books continues with Age of Aztec by James Lovegrove against Silver by Rhiannon Held. Whichever book I most want to keep reading after 50 pages will advance to the semifinals.

Age of Aztec: Solaris paperback, 507 pages, cover art by Marek Okon. Age of Aztec is a standalone SF adventure novel in the Pantheon series. James Lovegrove is a British author of a number of SF, horror and dark fantasy books. Age of Aztec advanced to the second round by defeating The Ultimate Game by Sean Austin.

In the first 25 pages, an Aztec blood rite at the London ziggurat was attacked by the terrorist called the Conquistador. The Jaguar Warriors blasted what they thought was the Conquistador with their lightning guns, but it was just his empty armor. The Conquistador escaped. Chief Kellaway of Scotland Yard killed the inspector responsible for the debacle. Inspector Mal Vaughn was promoted and given the Conquistador case.

Mal Vaughn and her assistant Aaronson go to London ziggurat. Mal determines that the Conquistador avoided capture by hiding for hours among the dead bodies of the sacrificial victims.

Rich English businessman Stuart Reston takes an aerodisc flight to Palermo. He’s interested in purchasing an obsidian mining company on the slopes of the volcano Mount Etna, and tours operations. The mining company’s Italian CEO thinks Reston is an uptight, but no nonsense type of guy.

An Aztec priest is brutally murdered, along with his two bodyguards, at Heathrow Airport. The TV News questions if it was the work of the Conquistador. Later, at Regent Park amphitheater, there’s a stage performance containing aspects of Aztec mythology.

Silver: Tor book trade paperback, June 2012, 317 pages, cover photograph by Trevillion Images. Rhiannon Held is a US writer. Silver, an urban fantasy, is her first novel, and start of a planned series. Silver advanced to the second round by defeating Destroyer of Worlds by Mark Chadbourn

In the first 25 pages, Werewolf Andrew Dare tracked down an unknown lone werewolf who smelled of silver. He found an injured, scrawny, somewhat deranged woman who talked to herself. She can no longer change into a wolf. She told him that Death called her Silver. Andrew coaxed Silver come with him. Someone hurt Silver by injecting her arm with silver.

Andrew decides to take Silver to the Roanoke pack house. He hopes that she’ll become more lucid if treated by their doctor. But Silver fears she will lead “the monster” to the others.

Andrew, who works outside the pack as an enforcer, isn’t entirely welcome in the Roanoke house. Rory, the Roanoke Alpha, doesn’t recognize Silver and is unwilling let her stay because she’s a madwoman. They don’t know where Silver is from, but Rory wants one of the Western packs to take her. Andrew queries several unhelpful Western alphas about possible were disappearances.

The Battle: We have a alternate world, military SF novel going against a contemporary urban fantasy with werewolves. Two very different books.

The first 25 pages of Age of Aztec was filled with brutal action scenes. The start of the next 25 pages wasn’t and dragged. The characters, for me, couldn’t carry the pace. But the next action scene worked, although it featured an Aztec priest getting murdered in the toilet.

I had problems getting into the characters. It didn’t help me that the first thing I learned about Inspector Mal was about her one-night stand. I disapproved of the Italian CEO’s demeaning jokes about his wife. I’m not sure of Stuart Reston's motivations.

The bit about the Aztec Empire using fusion plants to control eruptions of the world’s volcanoes seemed implausible.

Silver, on the other hand, is character driven, and not action packed. Death’s only appearance is in a speaking role in Silver’s mind. There’s been minimal action, only a slap away of an unwanted hand, and a slap in the jaw for insubordination. Shifting forms between human and wolf isn’t traumatic.

I found Andrew Dare to be a likable character. Andrew wants to do the right thing for Silver and investigate the threat. Silver is an interesting, but damaged character. Silver thinks her silver-injected arm contains snakes. I like that Death talks to her using the voices of dead people, and that Death takes people to get their voices.

This battle comes down to which I’d personally rather read: brutal action or slow-paced character building. Age of Aztec is more of a thrill ride, but I personally care to find out what happens with the werewolves.

THE WINNER: SILVER by Rhiannon Held

Silver by Rhiannon Held advances to meet either The Land of Decoration by Grace McCleen or The Mongoliad: Book One by Neal Stephenson, Greg Bear & five others in the semifinals.

To see the whole bracket, click here.
Posted by Fantastic Reviews at 12:10 PM