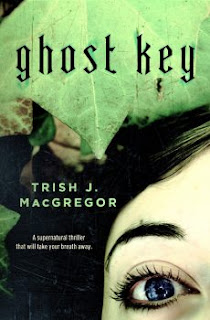 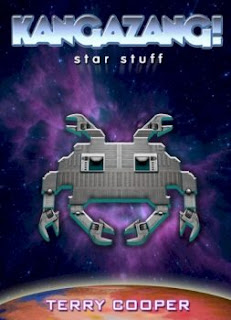 We begin the first round of Bracket Five of Battle of the Books with Ghost Key by Trish J. MacGregor vs. Kangazang! Star Stuff by Terry Cooper. The winner will be the book I (Aaron) most want to continue reading after 25 pages.

Ghost Key: Tor hardcover, August 2012, 351 pages, cover photo by Marta Bevaqua. MacGregor has written over two dozen mysteries and thrillers under the names T.J. MacGregor, Trish Janeshutz and Alison Drake. She won an Edgar Award in 2002 for best paperback original for her novel Out of Sight. MacGregor has also written over a dozen non-fiction books, mostly on astrology. She is married to fellow novelist Rob MacGregor.

Ghost Key is the second in the The Hungry Ghosts series. I have not read the first book, Esperanza, but apparently it concerned a struggle with malevolent spirits in a magical city in the Andes. Now in Ghost Key, some of those angry ghosts have fled to the United States. The first 25 pages introduce two viewpoint characters. Kate Davis is a middle-aged bartender in the Florida keys, struggling to support herself and her teenage son Rocky. She wonders if people around her are behaving strangely lately, when her mild-mannered boss and the shy local librarian remove any doubt by suddenly tearing each other's clothes off in the middle of her crowded bar. Nick Sanchez is a "remote viewer," a psychic working for a secret government agency. He is investigating the same disturbance Kate is experiencing first-hand. Nick is visited by his mother's ghost, who furthers his investigation by giving him some names to Google. (I am relieved to know we can still use search engines in the afterlife.)

Kangazang! Star Stuff is the sequel to Kangazang! Remote Possibilities (the audio version of which is narrated by Colin Baker of Dr. Who). The Kangazang! books are slapstick science fiction in the style of Douglas Adams. Our two heroes are Jeff Spooner and Ray Scump. In the tradition of Arthur Dent and Ford Prefect, Jeff is a human who left Earth with his friend Ray, who turned out to be an alien visitor. Apparently the two saved the universe in the first book, so now they are enjoying a well-earned holiday on Ray's home of Kangazang, along with their android companions Gridlock and Tailback. Tailback has a female form, and she and Jeff have started a relationship. But Tail decides things aren't going to work, because Jeff would like to have children and she is not equipped to oblige him, and so she runs away.

The Battle: Ghost Key starts out promisingly. MacGregor does a nice job of establishing an ominous mood, for example with her descriptions of a mysterious fog invading Kate's home:

The fog pressed up against the windows of the hotel bar with the persistence of a living thing. It eddied, flowed, constantly moved. Through the glass, she could see it drifting across the weathered brick in the courtyard, wisps of it caressing the leaves of the potted plants, and wrapping around the trunks of trees like strings of pale Christmas lights.

MacGregor also successfully builds interest in her lead characters, Kate through her relationship with her son and Nick through his history with his parents. An added touch many readers will enjoy is their distinctive pets, Nick's a lovable mutt and Kate's a protective hawk. I confess I tire easily of urban fantasy, but so far Ghost Key is definitely holding my interest.

In Kangazang! Star Stuff, Terry Cooper counters with humorous science fiction. Humor is devilishly tricky to pull off. You know you're funny enough to make your friends laugh over a drink. You write your jokes into the story and they seem funny to you. But you don't know if they are funny until people read them and either laugh or don't laugh. Sorry to say, through 25 pages I haven't been laughing. The humor relies too much on puns and silly wordplay for my tastes, as in this scene where Gridlock the android, who is a successful stand-up comic, packs a suitcase:

The Orbot nodded, closing the case.

Then he disconnedted his head unit, and put it on top of the case.

Jeff groaned. How this artificial idiot managed to become a success with this cheese-laden material was beyond him.

"Pack it in, Grid!" complained Jeff. Gridlock fell over in hysterics at this.

Kangazang! Star Stuff is much the easier of these two books for me to put down.

Ghost Key advances to the second round, to face either Railsea by China Miéville or The Express Diaries by Nick Marsh.

To see the whole bracket, click here.
Posted by Fantastic Reviews at 1:47 PM

For the heck of it, I, the site webmaster and sometime reviewer, also read the first 25 pages of Ghost Key.
I agree that the author did a good job establishing an ominous mood, with the foggy night, in the section including the bartender Kate and her son Rocky. That the oddly acting twosome of the librarian and Kate’s boss were drinking a mixed drink called "Skip and Go Naked" seemed oddly appropriate.
I think the psychic Nick Sanchez and his dog Jessie were likably introduced. But perhaps the remote viewing session could have been setup, or explained, somewhat better before jumping straight in. I liked, but don’t yet understand, the apparent relevance of numbers assigned to remote viewing targets.