Battle of the Books, Fall 2012, Second Round :: Song of the Serpent by Hugh Matthews vs. Auraria by Tim Westover 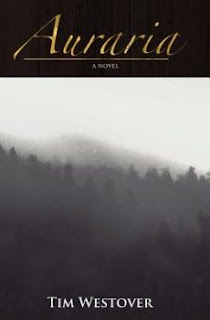 Our final second round match in the Fall 2012 Battle of the Books pits Song of the Serpent by Hugh Matthews (aka Matthew Hughes) against Auraria by Tim Westover. The book I most want to continue reading after 50 pages will grab the last spot in our Final Four.

Song of the Serpent: Paizo paperback, May 2012, 309 pages, cover art by Adrian Smith. Song of the Serpent is a tie-in to the Pathfinder role-playing game, by Matthew Hughes under his Hugh Matthews pen-name. It reached the second round by upsetting a seeded book, Losers in Space by John Barnes, in the first round.

In the first 25 pages, our protagonist Krunzle the Quick, a small but sharp-witted thief, was captured by a wizard. In the next 25 pages, Krunzle begins the quest assigned to him by the wizard's wealthy employer: to retrieve a daughter who has run away with a headstrong man. The wizard sends Krunzle on his way with an enchanted sword, magical boots to speed his journey, and an intelligent snake wrapped around his neck to ensure his loyalty. With his amazing sword and boots Krunzle seems unbeatable at first, but by the end of 50 pages he is captured by a second wizard.

Auraria: QW Publishers trade paperback, July 2012, 390 pages. Auraria is a fantasy set in a Nineteenth Century Appalachian mining town. It advanced to the second round with a surprise win over Zombie Bake-Off by Stephen Graham Jones, making it the first independent book to win a contest in the Battle of the Books.

In the opening 25 pages of Auraria, our protagonist James Holtzclaw arrived in the town of Auraria, with directions from his boss to buy out all the land in town. Over the next 25 pages, Holtzclaw starts to acquire swathes of the town, meeting several interesting characters and all the while refusing to acknowledge the ubiquitous presence of the supernatural in Auraria.

The Battle: It would be a major surprise for either an RPG tie-in or a self-published book to make the Final Four of the Battle of the Books, but one of those two things is about to happen. But either way, it will be a pleasant surprise, since through 50 pages, both Song of the Serpent and Auraria and very well-written and entertaining.

Song of the Serpent does not require any prior familiarity with Pathfinder, but it's not hard to tell that some of the props of the story, such as the enchanted sword, derive from the game. Still, Matthew Hughes takes a breezy approach to the Pathfinder universe that makes for fun reading, even if you're not especially interested in role-playing games. I particularly like Hughes' snappy dialogue, althought there is less of that in the second 25-page section, as Krunzle commences his solitary quest.

Meanwhile, so far the storytelling in Auraria is remarkably confident. Even without the fantasy elements, the descriptions of the scenery and the delightful dialogue would make Auraria a very strong historical novel. But it's the fantasy touches that make the book especially memorable. I love watching Holtzcraw try to rationalize or ignore the unmistakeable magic of the town. For example, he reacts in a wonderfully deadpan fashion when he goes to buy a farmer's home, asks the farmer to introduce his wife, and is told to ignore her: "She's been fluttering around here ever since she died."

When we decided to allow independent books in the Battle of the Books, it was with the hope that perhaps somewhere along the line we would find a hidden gem about which we could help spread the word. Auraria is it. Tim Westover writes at a professional level, and through 50 pages, his quirky tale about a strange mining town where magic hides in plain sight is wonderfully fresh and original.

Auraria advances to the semifinals to face Glamour in Glass by Mary Robinette Kowal.

To see the whole bracket, click here.
Posted by Fantastic Reviews at 7:40 AM