Battle of the Books, Bracket Five, First Round :: The Croning by Laird Barron vs. Fated by Alyson Noël 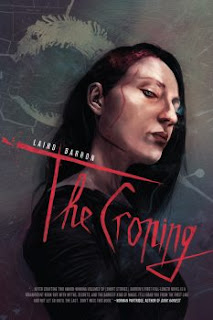 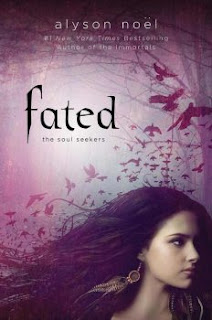 The first round of Bracket Five of Battle of the Books continues with a match-up of The Croning by Laird Barron versus Fated by Alyson Noël. The winner will be the book I (Aaron) most want to continue reading after 25 pages.

The Croning: Night Shade hardcover, May 2012, 245 pages, cover art by Cody Tilson. Laird Barron has been publishing horror short fiction since 2000, winning three Shirley Jackson Awards and receiving numerous nominations for the Stoker Award and the International Horror Guild Award, as well as a World Fantasy Award nomination. His short fiction has been collected in The Imago Sequence and Other Stories, Occultation, and the forthcoming The Beautiful Thing That Awaits Us All.

The Croning is Barron's first novel. The initial chapter is an elaborate and dark reworking of the Rumpelstiltskin story, as if told by H.P. Lovecraft. The tale is from the point of view of "the Spy," a miller's son and half-brother of the girl who became Queen when she managed to spin straw into gold. We soon learn that the Spy is the father of the child the Queen has promised to a strange Dwarf in payment for his help. The Spy is desperate to find the Dwarf, but his search leads him to a mysterious, evil conspiracy of followers of the "Old Leech." The second chapter skips ahead to Mexico City, 1958. Visitor Donald Miller(!) searches for his wife, who has disappeared, but the authorities to whom he turns for help seem to be toying with him. Through 25 pages, we have no idea how this relates to the Rumpelstiltskin tale.

Fated: Macmillan audio, May 2012, 9 CDs (also published in hardover by St. Martin's). Alyson Noël is the author, by my count, of 19 young adult novels, which have sold very well. Her books include the six-volume Immortals series, beginning with Evermore, and the four-volume Riley Bloom series, beginning with Radiance.

Fated is the first in a new Noël series, called "The Soul Seekers." The second book Echo is out, with at least two more planned, and the series has already been optioned for film adaptation. The heroine of the series is Daire Santos, a young woman with magical abilities she does not yet understand. In the opening chapters of Fated, Daire is in Morocco celebrating her sixteenth birthday with a young actor, when she has a series of strange visions that feature a great many crows and severed heads. She regains consciousness in a hospital, to learn that she attacked her actor boyfriend. The doctor has had Daire restrained, and orders her mother to get her back to the United States for psychiatric treatment. The back of the book suggests she will wind up in New Mexico with her grandmother, who we believe knows more about Daire's abilities than Daire herself.

The Battle: The only time I feel bad about the apples-to-oranges nature of the Battle of the Books is when I have to judge a book that is clearly targeted at an audience that ain't me. Alyson Noël is writing for teenaged girls, the Twilight demographic. So the opening chapter of Fated places heavy emphasis on the dreamy looks of Daire's heartthrob actor boyfriend, not very subtly named "Vane." Daire and Vane share a kiss, the description of which extends for over 200 words. I don't doubt that the scene gave shivers to many of Noël's young readers, but it didn't do much for me.

Meanwhile, I very much enjoyed the opening chapter of The Croning, with its distinctive mashup of fairy tale and Lovecraft and a modern voice——e.g., the Spy affectionately thinks of his half-sister/lover the Queen, "She'd elevated herself unto royalty by convincing the old King she possessed the secrets of alchemy, that she could spin flax into gold, or some similar horseshit." I don't yet know how Rumpelstiltskin ties into a 1950's disappearance in Mexico City, but I am eager to find out.

THE WINNER: The Croning by Laird Barron

The Croning advances to the second round, to face Harmony by Keith Brooke.

To see the whole bracket, click here.
Posted by Fantastic Reviews at 1:11 PM