Battle of the Books, Fall 2012, First Semifinal :: Further: Beyond the Threshold by Chris Roberson vs. The Drowned Cities by Paolo Bacigalupi 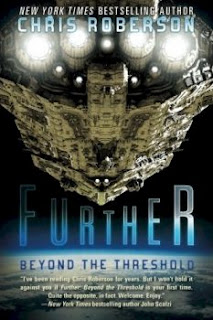 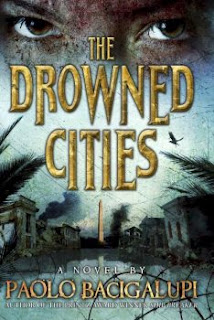 The Final Four of the belated Fall 2012 Fantastic Reviews Battle of the Books begins with Further: Beyond the Threshold by Chris Roberson against The Drowned Cities by Paolo Bacigalupi. The book I most want to continue reading after 100 pages will reach the championship round.

Further: Beyond the Threshold: 47North trade paperback, May 2012, 343 pages, cover art by Marcel Clemens & Algol. Further reached the semifinals by defeating Royal Street by Suzanne Johnson in the first round and Hemlock Grove by Brian McGreevy in the second round.

Ramachandra Jason (RJ) Stone is from our near-future, after Earth was devastated by a meteor strike. Stone was the captain of the first interstellar voyage, but the suspended animation system malfunctioned, and now he has been woken 12,000 years in the future. Most of the opening sections of Further consist of him looking around this strange far-future universe, in which humans, post-humans, and AIs have settled in a myriad of wolds, most connected to each other by wormhole gate. In the second 50-page section, he travels with his eagle-shaped AI guide to a world populated by "anachronists," to whom Stone is a great celebrity. There Stone meets Xerxes 298.47.29A, an envoy from a group of humans who settled beyond the web of wormholes. Xerxes is very bored, and one expects that Stone and Xerxes will soon form a plan to get outside this fabulous but very lived-in future civilization.

The Drowned Cities: Little, Brown hardcover, May 2012, 434 pages, cover art by Neil Swaab. The Drowned Cities got here with wins over Alexander Wisbal and the Hall of Heroes by Isaac A. McBeth in the first round and James Swain's Dark Magic in the second round.

The star of the opening 25 pages of The Drowned Cities was Tool, a bioengineered man-beast familiar to readers of Bacigalupi's prior novel Ship Breaker. Tool was chased by soldiers through the demolished "Drowned Cities" of the East Coast, then did battle with a mutant alligator. The next 25 pages featured Mahlia, a young doctor's assistant, hated by the locals because her father was one of the Chinese peacekeepers who came to America to help it recover from its collapse, only to give up and leave. In the next 50-page section, the two storylines come together. Mahlia and her friend Mouse find a weakened Tool, who captures Mouse. Mahlia bargains for her friend's life, promising to bring Tool antibiotics. But she is thwarted by the soldiers who are searching for Tool, who have set up camp at the doctor's house where Mahlia lives.

The Battle: Generally, if you make it to the semifinals of the Battle of the Books, you're doing a lot of things right. What this Battle comes down to is many little things that Roberson does well and Bacigalupi does exceptionally well.

For instance, both authors do a nice job of giving their main character a backstory to help readers feel emotionally connected. In Further, Captain Stone's amazement at this future world is tempered by his loneliness and regrets from being the only survivor of his mission. There is a strong scene where he wistfully watches an old movie that fictionalized the mission while it was still lost in space, including a hypothetical romance between him and a crewmate, with whom he actually had hoped to become involved. (Forgive the plug, but I especially liked this because my story "The Long View" in the March-April 2013 issue of F&SF also features a protagonist transported into the future who watches a film glamorizing her own life.)

In The Drowned Cities, Mahlia struggles with feelings of abandonment after her father returned to China without her, while she is simultaneously persecuted by the locals for being half-Chinese, even losing her right hand to their prejudices. Here she flashes back to before her father left, when she was still proud of her Chinese heritage:

Mahlia had been glad she was Chinese then, all the way up until her father took a toy wooden horse away from her and she bit him for it. He slapped her then, and said she had too much Drowned Cities in her.

"No respect," he said. "Drowned Cities, through and through. Just like your mother. Animals."

Mahlia's mother fought with him over that, and then he called them both Drowned Cities, and suddenly Mahlia was afraid. Her father hated the Drowned Cities more than anything. And now she discovered she was the same as the people he fought every day.

This is entirely a subjective reaction, but after 100 pages, I appreciate Roberson's characterization of Stone, while I have ceased to think of Mahlia in terms of characterization, because to me she has become an actual person.

Similarly, both of these books have an excellent setting. Roberson presents his imaginative far-future through Stone's first-person point of view with wonderful exuberance, e.g., when Stone is shown his palatial new quarters, he remarks "the interior was even grander than the outside, which had been constructed out of diamond." Bacigalupi's fallen America is also fascinating, and somehow not as bleak as it should be, because this future is a backdrop to show the strength of character of Mahlia, Mouse, and their benefactor Dr. Mahfouz.

But while the opening sections of Further are a travelogue directly focused on exploring the setting, the opening of The Drowned Cities launches straight into the plot, tossing out details about this future even as the main storylines unfold. This is not a complaint against Roberson——it makes sense for him to take the time to show why Stone is not satisfied to hang around this far-future universe, before the next phase of Stone's journey begins——but it does make Further not quite so difficult to put down after 100 pages as The Drowned Cities.

The Drowned Cities advances to the championship round, to face either Glamour in Glass Mary Robinette Kowal or Auraria by Tim Westover.

To see the whole bracket, click here.
Posted by Fantastic Reviews at 1:06 PM