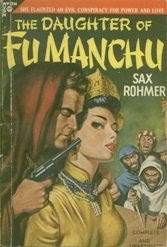 As we have seen the past two weeks, any history of the pulp magazines must acknowledge the unfortunate racial stereotypes that were prevalent in the pulps. However, there were also occasions when the pulp magazines actively attempted to change prejudiced attitudes in society. Next in our tour of the pulp magazines is an issue of the most successful of the "hero pulp" magazines, in which our hero battles racial prejudice . . . with a pistol. But first, next week we will honor a recently departed pulp writer.
Posted by Fantastic Reviews at 10:34 PM