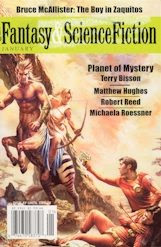 Of the four short stories, my favorite was "Horse-Year Women" by Michaela Roessner. It’s an emotional modern story entwined with tales of women born in the Oriental Year of the Horse. My least favorite story was the "Shadow Man" by Matthew Hughes due to its creepy horror elements. "A Daze in the Life" by Tony Sarowitz is a near future science fiction story about hiring out brain processing power. In fairy tale "Journey to Gantica" by Matthew Corradi a woman grows as tall as a giant and shrinks to miniature size.
Posted by Fantastic Reviews at 11:06 AM