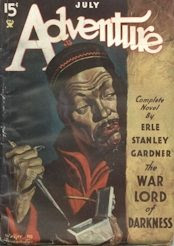 At the same time, while politically correct attitudes can be taken to excess, this kind of cover art is a reminder of the important function served by what we now call "political correctness." By perpetuating racial stereotypes, the pulp magazines contributed to bigoted attitudes, helping to make possible for example the internment of Japanese-Americans during World War II. Stereotypes about Asians and African-Americans were especially common in pulp fiction, and the fact that social norms have evolved to the point that such attitudes are no longer tolerated in the publishing field is something to be celebrated. I hope you will forgive me for circulating this cover image, but I think it is a useful exercise to look back upon the attitudes of the past, so that we may see how far our society has come and remind ourselves not to repeat past mistakes.
Posted by Fantastic Reviews at 9:05 PM