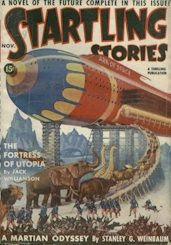 From 1928 on, Jack Williamson was one of the regulars of the science fiction pulps until the market shifted to paperbacks. It is remarkable that he was then able to reinvent himself as a more sophisticated writer and continue his career for another half-century. Next week we will honor another mainstay of the science fiction pulps who recently passed away, a writer who was not inclined to make that transition after the pulp magazines disappeared and had written only sparingly since the 1950's.
Posted by Fantastic Reviews at 11:32 PM

Curious image on the cover. What is the story of the presumably Cruise Ship castaways being executed by the uniformed soldier types?