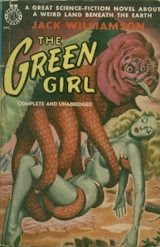 As you can see from the Book of the Week, Avon Fantasy Novel #2 printed in 1950, Jack Williamson was one of the authors who helped science fiction and fantasy break into the new paperback fiction market. He was already very familiar to SF readers at the time thanks to his pulp fiction, an example of which we will see next week.
Posted by Fantastic Reviews at 10:36 PM