Aaron's Book of the Week :: The Graveyard Book by Neil Gaiman 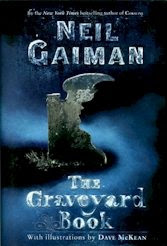 The Book of the Week is The Graveyard Book by Neil Gaiman, which over the weekend won the Hugo Award for best science fiction or fantasy novel of 2008. The novel had already won this year's Newbery Medal for young adult fiction, making it the first novel ever to win both prestigious awards.

The Graveyard Book follows Nobody Owens, raised from infancy by the (mostly) friendly ghosts of the local graveyard after his parents were murdered. The Graveyard Book is a wonderful showcase of Neil Gaiman's witty and charming voice, and is certain to be enjoyed by readers young and old for a great many years to come, especially if Hollywood does a good job with the film version currently in production. This is Neil Gaiman's fourth Hugo Award, his second for best novel (the first was for American Gods) and his second for a work of young adult fiction (after "Coraline," also adapted to film earlier this year).

The Book of the Week is a stated first edition (library binding) -- note the absence of the Newbery seal which appears on later copies of the book. I believe this is the true first edition, slightly preceding the British edition and the Subterranean Press limited edition. The cover and interior illustrations are by famed comics illustrator Dave McKean, who often worked with Neil Gaiman earlier in his career, when Gaiman was primarily known for his graphic novels, particularly the popular Sandman series. While it's not worth a fortune just yet, I am expecting the BOTW to appreciate significantly in value over time, as copies are snatched up both by science fiction collectors, who like to have firsts of Hugo winners, and by YA fiction collectors, who covet firsts of Newbery books.
Posted by Fantastic Reviews at 10:33 PM