Aaron's Book of the Week :: West of Eden by Harry Harrison 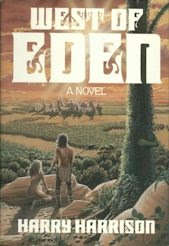 The Book of the Week is West of Eden by Harry Harrison, in honor of Mr. Harrison, who this year was named Grand Master by the Science Fiction and Fantasy Writers of America. Harry Harrison is equally at home writing serious science fiction, such as his famous cautionary tale of overpopulation and ecological decline Make Room! Make Room! (filmed as Soylent Green), and humorous tongue-in-cheek adventures like The Stainless Steel Rat and Star Smashers of the Galaxy Rangers.

The Book of the Week is a signed first edition of West of Eden, my personal favorite Harrison novel, published in 1984. It is an alternate history, the subgenre of science fiction that asks what if some historical event had happened differently. Typically the branching off point is in the recent past -- What if the Nazis has won World War II? What if the North and South had reconciled at the beginning of the Civil War and joined forces to fight against England (Harrison's Stars and Stripes Forever!) -- but in West of Eden history branches off 65 million years ago, the time when an asteroid or comet is believed to have hit the Earth and wiped out the dinosaurs. West of Eden shows how the world might look today if that had not happened, with newly evolved human beings struggling against the intelligent descendents of the dinosaurs.

The Hugo Awards will be presented this weekend, so our next BOTW will pay tribute to one of the big winners.
Posted by Fantastic Reviews at 2:23 PM

Labels: 1984, Book of the Week, Harry Harrison, West of Eden