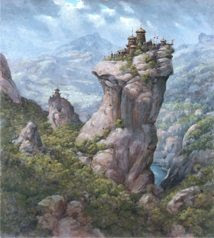 "For years my city gave the hearts of maidens to the corn-man to awaken him," the story begins. Our narrator is Metlicue, chosen for this sacrifice by the village priests, who proceed unaware that in defiance she gave her virginity to a soldier the night before:

I felt the first cut like a violation. Pain burst in my chest, would not cease. I screamed and screamed until my voice was raw. No. No. I never asked for this! I saw a priest lift out a bloody, pulsating thing dizzyingly high above me, and a sensation of emptiness spread from the hole in my chest and swallowed me.

The priests placed my heart, still beating, in the mouth of the effigy. One of them spoke the healing spells over me. I rose, shaking, numb all over, stared at the corn-man.

Metlicue is left without a heart, her emptiness a wonderful metaphor for the alienation felt by those who have been molested or traumatized, but the story only builds from there. For Metlicue's act of defiance has in turn destroyed the innocence of the corn-man, on whom her people depend for good fortune and plentiful harvests, and Metlicue will have to face him again. "Blighted Heart" is a powerful, beautifully written story, and a great example of why de Bodard was the runner-up for this year's John W. Campbell Award for Best New Writer, losing out very narrowly to David Anthony Durham.

Beneath Ceaseless Skies hasn't gotten a lot of attention yet, but it has been publishing some excellent authors, such as David D. Levine, Yoon Ha Lee, Marie Brennan, Holly Phillips, Stephanie Burgis, Richard Parks, among many others. It pays professional rates, has held strictly to its publishing schedule (a two-story issue every other week) for nearly a year, and provides audio versions of many of its stories. Check it out!
Posted by Fantastic Reviews at 8:58 PM