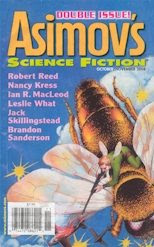 The Magazine of the Week is the October/November 2008 issues of Asimov's Science Fiction, which contains this year's Hugo Award winner for Best Novella, "The Erdmann Nexus" by Nancy Kress. (The cover is retro, classic pulp art by Virgil Finlay.)

"The Erdmann Nexus" follows Henry Erdmann, an aging physicist in a nursing home, who is suffering strokelike incidents. He learns that others in the home are having similar episodes, and gradually comes to realize that they are all undergoing a remarkable transformation. Nancy Kress has been a regular fixture on the Hugo ballot, with eleven nominations since 1990, and "The Erdmann Nexus" is her second win (after the novella "Beggars in Spain," later expanded into a Hugo-nominated novel, about a new technology that allows folks wealthy enough to afford it to forgo sleep). She has also won four Nebulas and a host of other awards. She will be a guest of honor at MileHiCon here in Denver in October.

We'll get to the Hugo-winning novelette next, but first a science fiction novel that recently hit the big screen.
Posted by Fantastic Reviews at 11:54 PM