Battle of the Books, Bracket Six, First Round :: Caliban's War by James S. A. Corey vs. Blood of the City by Robin D. Laws 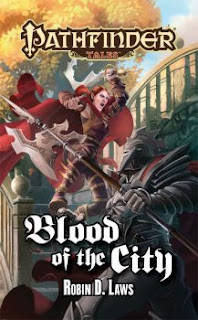 We continue the first round of Bracket Six of the Battle of the Books with Caliban's War by James S. A. Corey going up against Blood of the City (Pathfinder Tales series) by Robin D. Laws. The winner will be the book I (Aaron) most want to continue reading after 25 pages.

Caliban's War: Orbit trade paperback, July 2012, 595 pages, cover art by Daniel Dociu. Caliban's War is the second volume of James S.A. Corey's series The Expanse, following the Hugo-nominated Leviathan Wakes. James S.A. Corey is the collaborative pseudonym of Daniel Abraham and Ty Franck. On his own, Daniel Abraham is best known for his fantasy works, including The Long Price Quartet (beginning with A Shadow in Summer) and The Dagger and the Coin series (beginning with The Dragon's Path). He also writes urban fantasy under the name M.L.N. Hanover. Abraham has won the International Horror Guild Award and has been nominated for the Hugo, Nebula, and World Fantasy Awards. Ty Franck's only publication before the Expanse series was a short story in Orson Scott Card's InterGalactic Medicine Show.

Caliban's War begins on Ganymede, where strange forces are at work. Creepy people abduct a young girl whose mother disappeared on Ceres Station——which, readers of the first book in the series recall, was recently attacked by an alien weapon/intelligence/ whathefukwazzit. Then a bizarre creature assaults Earth and Mars troops stationed on Ganymede, potentially ending the tense cease-fire between the two superpowers. We check in with Jim Holden and the crew of the Rocinante, heroes of Levaiathan Wakes, who are told to return to base because "something's happening on Ganymede."

Blood of the City: Paizo paperback, September 2012, 346 pages, cover art by Adam Danger Cook. Blood of the City is a tie-in to the Pathfinder role-playing game. It's the fourth Pathfinder book we've received for the Battle of the Books, and the previous three have made a strong showing, going 2-1 in their opening round matches, with Nightglass by Liane Merciel advancing to the Final Four of Bracket #5. Robin Laws is a successful game designer, who has written multiple RPG tie-in books, including a previous Pathfinder volume, The Worldwound Gambit.

The heroine of Blood of the City is Luma, a young half-elf "cobblestone druid," who can sense things by listening to the "citysong" of her native town of Magnimar. She is part of a band of mercenaries fighting for her wealthy family. As the book opens, they rescue a young nobleman from kidnappers, then clash with a group of "Hellknights," the official peacekeepers in the city.

The Battle: While I have been very impressed with the quality of the Pathfinder books we have seen so far for the Battle of the Books, Blood of the City faces a daunting challenge in this Battle, for Daniel Abraham is one of my favorite authors working today, and I thought Leviathan Wakes was most deserving of its Hugo Award nomination.

Blood of the City takes its best shot by opening with a good action scene. But here is a thing I'm learning doing the Battle of the Books: while a slow opening without much happening can lose readers quickly, so can a fast opening with a lot happening, when the author hasn't given readers any reason to care about it all. As the book begins, Luma and her companions are fighting for their lives, but I don't really know who Luma and her companions are. They are trying to rescue someone, but I don't know who it is (still don't at the end of 25 pages). So the action doesn't have much impact for me.

Caliban's War also opens with action, but does a more effective job of giving me a sense of the people to whom the action is happening and what might be at stake. It helps that I've read the previous book in the series, but even if I hadn't, a passage like this shipboard dialogue would quickly have me caring about the characters involved:

He pulled out his hand terminal and called Naomi.

A pause. "You called me from the galley? While we are on the same ship? The wall panel just one step too far away?"

Holden could hear tapping from Naomi's end. She hummed to herself as she worked.

"Nope," she said. "Only area without power seems to be the galley. Also, Alex says we're less than an hour from fighting with space pirates. Want to come up to ops and fight pirates?"

Abraham & Franck make this look easy, but they always leave you wanting to read more.

Caliban's War moves into the second round, where it will face London Eye by Tim Lebbon.

To see the whole bracket, click here.
Posted by Fantastic Reviews at 9:32 PM

First of all let me tell you, you have got a great blog. It is interesting to read it. Hope to see the next post soon.