Battle of the Books, Bracket Six, First Round :: The 13th Zookeeper by Bernd Struben vs. No Peace for the Damned by Megan Powell 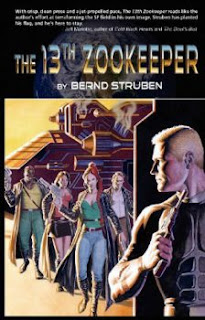 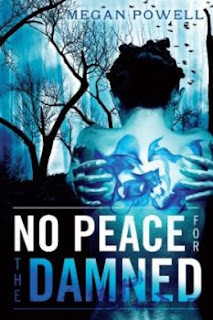 The penultimate match-up of the first round of Bracket Six of the Battle of the Books has The 13th Zookeeper by Bernd Struben taking on No Peace for the Damned by Megan Powell. The winner will be the book I (Aaron) most want to continue reading after 25 pages.

The 13th Zookeeper: Strider Nolan trade paperback, February 2012, 303 pages, cover art by Azim Akberali. Bernd Struben was born in Holland but raised in the United States. The 13th Zookeeper is Struben's second novel after 40 Years (2008). He has also co-edited the anthologies Visions Vol. 1 and Visions Vol. 2, to which he contributed stories.

In The 13th Zookeeper, the planet of Zooearth has been terraformed to resemble prehistoric Earth and populated with Earth fauna, including primitive humans. Twelve zookeepers and a host of automated systems keep watch over the planet. Auren Bilder is a rich slacker, appointed as a zookeeper at his family's behest to save them the embarrassment of his presence in galactic high society. In the opening chapters, Bilder tracks down a poacher on Zooearth, while elsewhere in the galaxy a group of scoundrels discusses the possibilty of stealing valuable resources from Zooearth.

The heroine of No Peace for the Damned is Magnolia Kelch, a young woman with extraordinary talents, including the ability to read minds and to regenerate herself even after gruesome injuries. As the book opens, she escapes from her evil and cruel family and volunteers to help the Network, a secret organization combating evil powers in the world, chief among them her family. Not surprisingly, several members of the Network distrust her motives.

The Battle: The Battle of the Books format causes me to sample many books I otherwise would not have opened. Here are two books I would not have read on my own, but I'm glad I gave them a try, for both start stronger than I had any reason to expect.

The 13th Zookeeper is an independent book with a frankly uninspiring premise: the protagonist has to defend a planet-sized zoo against an invasion of thieves. But for all that, the writing is solid through the opening 25 pages. I particularly liked the description of the band of ruffians we suspect will soon set off to Zooearth to do some crimes.

Unfortunately, my appreciation for The 13th Zookeeper is diminished by what I consider serious missteps in how the opening chapters are presented. First, our protagonist Auren Bilder discovers a poacher on Zooearth. Instead of capturing him to serve what, we are told, would be a two-year prison sentence, Auren instead uses the fellow's own poaching weapons against him, murdering the guy brutally and in cold blood. Struben has given readers no reason to believe Auren——who describes himself as lazy and certainly does not come across as an antihero——would do such a vicious thing, and absolutely no reason for us to approve.

Then we have a chapter following Captain Zacharia Thames and his band of ruffians. For most of this chapter the group seemed to be presented as lovable rogues. But then they discuss the possibility of abducting human beings from Zooearth for slave trafficking. So that's contemptible, and at the end of 25 pages I have no characters I can root for, and so not much desire to keep reading.

In contrast, No Peace for the Damned also gives us some very evil antagonists, but it's clear from the outset that they are evil; meanwhile, Magnolia Kelch is a most likeable protagonist. There is a harrowing flashback to some of the horrible treatment she received from her own family, which simultaneously cements our dislike of them and our sympathies for her.

That's not to say all the characters break into simple good-guy/bad-guy categories. Rather, some of the members of the Network are so suspicious of Magnolia that, from her perspective, they can be seen as adversaries. Yet their suspicions are understandable, in light of their own experiences with Magnolia's family. Those suspicions are also a barrier between Magnolia and a potential love interest.

So we have likeable people facing deadly antagonists, even as the good guys are in conflict with each other, through no fault of their own——that's a story I'd like to read more of.

THE WINNER: No Peace for the Damned by Megan Powell

No Peace for the Damned advances to the second round, to take on either Be My Enemy by Ian McDonald or Besieged by Rowena Cory Daniells.

To see the whole bracket, click here.
Posted by Fantastic Reviews at 10:01 AM