Battle of the Books, Bracket Six, First Round :: Technomancer by B.V. Larson vs. Pazuzu's Girl by Rachel Coles 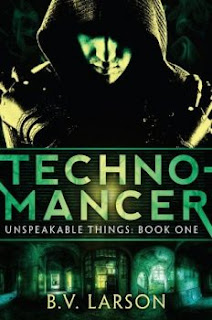 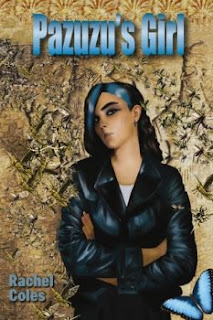 The first round of Bracket Six of the Battle of the Books continues with Technomancer by B.V. Larson going against Pazuzu's Girl by Rachel Coles. The winner will be the book I (Aaron) most want to continue reading after 25 pages.

Technomancer: 47North trade paperback, July 2012, 366 pages, uncredited cover art. Technomancer is the first book in a new urban fantasy series starring Quentin Draith. B.V. Larson is a new writer who has managed to release a dozen books in the past three years, mostly self-published——I believe Technomancer and its sequel The Bone Triangle are Larson's only titles so far that are not self-published, part of Amazon's strategy of picking up some of the most successful independent authors for its 47North imprint.

Technomancer begins with Quentin Draith waking in a sanatorium with no memory of who he is or how he got there. He quickly decides that he is a prisoner, that the staff has kept him heavily sedated so as to hold him against his will. The evidence for this is rather flimsy, since he really has suffered severe injuries, but he's confident enough in his conclusion that he promptly beats the crap out of an orderly and holds a nurse at gunpoint to get out. He confronts the person in charge, Dr. Meng, who proves to have magical powers. She teleports him out of the sanatorium, telling him to continue his investigations.

Pazuzu's Girl: JournalStone trade paperback, February 2012, 266 pages, cover art by Philip Renne. Pazuzu's Girl is the self-published first novel of Rachel Coles, who previously published a short story in the anthology What Fears Become, as well as two indie collections of her other short fiction.

Pazuzu's Girl brings the Mesopotamian demon Pazuzu into the present day. The heroine of the story is his daughter Morpho Wilson. Morpho is having a little trouble fitting into high school life. We get an example why when she meets a boy she likes, who is promptly scared witless by a visit from Pazuzu in the form of a plague of locusts. Other problems to emerge in the first 25 pages include a warning from the homeowners' association that said plague of locusts is a covenant violation, and hints that Pazuzu's former demon lover, who killed Morpho's mother when Morpho was an infant, may soon be coming after Morpho as well. Pazuzu fears that he may not be able to protect his daughter.

The Battle: We have two urban fantasies going head-to-head, rendering my mild prejudice against the sub-genre irrelevant.

Technomancer begins with the protagonist waking up with severe amnesia. This is a bit cliché, so Larson needs to give me a reason pretty quickly to stick with the story. Instead he has the protagonist immediately start bashing heads, when it has not been clearly established this was necessary. Indeed, it seems it was not necessary, since it soon turns out Dr. Meng was perfectly happy to release him. We get a glimpse of magic, as Dr. Meng gives Draith the vague instruction to continue his investigations. Unfortunately, this does not give me any reason to continue my reading, since I have no clue what these investigations entail or what may be at stake. No doubt Larson intends to reveal that eventually, but such gradual disclosure of what the book is about tends not to go over well in the Battle of the Books format.

Pazuzu's Girl also eases us into the story gradually, but with some important distinctions. First, Coles has let us know in broad terms what's at stake: Morpho's life is in danger from another demon, perhaps too powerful for Pazuzu to stop. Second, there is some effective humor, such as Pazuzu's warning from the HOA to get all those locusts off his property. Third, and most importantly, Coles does a nice job of interesting us in her characters. Here, for example, Morpho introduces herself to her potential love interest JD while serving detention:

"Morpho. That's a cool name. Like the butterfly. Did your parents name you that or did you change it?"

"JD, Morpho, stop talking and write, or you get another detention added onto the list."

They put their heads down for a few minutes. Then JD's hand slid over to the middle of the aisle with an inked word on his palm. Was?

Morpho nodded. JD nodded back. I'm sorry, he wrote. She smiled and scribbled aimlessly on her page. "Me too," she whispered.

I accused B.V. Larson of cliché, and this dialogue——"My mother's dead." "Oh, sorry."——could also come across as cliché, except Coles turns it into a charming moment by having JD write the words "I'm sorry" on his hand. Little touches like that can be the key to making me want to read further.

Pazuzu's Girl advances to the second round, to face After the Fall, Before the Fall, During the Fall by Nancy Kress.

To see the whole bracket, click here.
Posted by Fantastic Reviews at 12:55 PM