Battle of the Books, Bracket Six, First Round :: The Skybound Sea by Sam Sykes vs After the Fall, Before the Fall, During the Fall by Nancy Kress 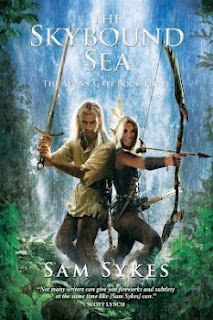 In the third battle of the first round of Bracket Six of the Battle of the Books we have The Skybound Sea (The Aeons' Gate, Book 3) by Sam Sykes versus After the Fall, Before the Fall, During the Fall by Nancy Kress. The winner will be the book I (Aaron) most want to continue reading after 25 pages.

The Skybound Sea: Pyr trade paperback, September 2012, 494 pages, cover art by Paul Young. The Skybound Sea is the final volume of the Aeons' Gate trilogy of high fantasy, following Tome of the Undergates (I always read that title as Tomb of the Undergraduates, which sounds like a slasher film set in a sorority house, but alas, it ain't) and Black Halo. I've never met Sam Sykes and I can find no evidence that he existed before 2009, when he published his first piece of short fiction, cowritten with Diana Gabaldon; still, I've decided I like him, because he took the time to explain to the world once and for all that cats cannot solve mysteries. Incidentally, The Skybound Sea wins the damning-with-faint-praise award for the most understated cover blurb ever published, courtesy of John Scalzi: "I do not wish Sam Sykes dead."

As the third in a trilogy, The Skybound Sea starts with the action already in full swing. The book begins with a short summary of the story so far, followed by a scene in which a troubled fellow named Hanth scrambles to prevent a dangerous god called Daga-Mer from being released into the world. Then we check in with Lenk, a warrior I suspect is the main protagonist, who dreams of betraying and being betrayed. Next a man named Dreadaeleon, who is suffering from an unnatural degenerative condition called "the Decay," participates in an autopsy of a "netherling," carried out by companions who dislike and distrust one another.

As the title suggests, After the Fall, Before the Fall, During the Fall follows three parallel timelines. In 2013, mathematician Julie Kahn is helping Agent Gordon of the FBI——with whom she has obvious sexual tension——to analyze the pattern behind a string of bizarre child abductions. In 2014, new strains of bacteria are forming. In 2035, the last few surviving humans cling to life with a time machine, which they use to obtain supplies and reinforcements from the past. They believe the world was destroyed by aliens they call the Tesslies, and that these aliens later provided the time machine for their own ineffable reasons. But none of the survivors has seen one of these creatures, so we don't know if that's right.

The Battle: The Skybound Sea has a brash, bold style——if it's ever filmed, the FX and make-up people will have a ball with the monsters while the score will be very heavy on bass drums. It takes a certain flair to pull this off, and Sykes demonstrates that, right from the book's opening lines:

No matter what god he believes in, a man is not entitled to much in life.

I like that line, and the whole prologue, in which Lenk bitterly contemplates vengeance against everyone who has betrayed him. But after a few pages, Sykes' melodramatic style, filling the narrative with "viscous gossamer ooze" and "flaming urine," gets to be a bit much to my tastes. The idea of 470 more pages feels as much daunting as appealing.

Meanwhile, Kress masterfully eases us into the narrative of After the Fall, Before the Fall, During the Fall. We start with an action sequence, one of the child abductions, from the point of view of the desperate abductor. There is an implicit moral issue about what the future remnants of humanity are doing, but Kress doesn't press the issue yet, giving the reader time to digest what's happening. Kress effectively interweaves the different timelines, building interest simultaneously in all three threads, while at the same time suggesting a lesson in how our future is at the mercy of the past and present. The characterization in the opening passage is also strong; I particularly like Pete, the doomed young man of the future, and I very much would like to read more about him. And that desire to keep reading is what the Battle of the Books is all about.

After the Fall, Before the Fall, During the Fall moves into the second round, to take on either Technomancer by B.V. Larson or Pazuzu's Girl by Rachel Coles.