Battle of the Books, Bracket Six, First Round :: The Snow by Ross S. Simon vs. Earth Unaware by Orson Scott Card & Aaron Johnston 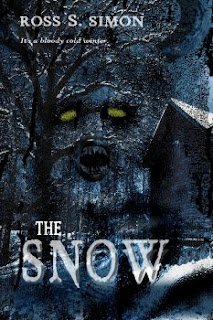 The second match-up in the first round of Bracket Six of Battle of the Books features The Snow by Ross S. Simon against Earth Unaware (The First Formic War) by Orson Scott Card & Aaron Johnston. The winner will be the book I (Aaron) most want to continue reading after 25 pages.

The Snow: Damnation Books trade paperback, March 2012, 145 pages, cover art by Dawné Dominique. The Snow is the debut novel of Ross S. Simon, who sometimes masquerades under the name Sam Ridings. The Snow opens on Leif Erickson's Viking longship, in the middle of a fatal meeting with the Norse trickster god Loki. We skip ahead to 1942 aboard a German U-boat, where a Nazi warrant officer has a strange encounter, presumably with the same deity. Next in Loki's path is a modern-day New York stockbroker. Across town, our protagonist Donald Holly is attacked by a possessed bum, prompting him to decide to move back to Minnesota. But it does not appear Loki is through with him.

Earth Unaware: Tor hardcover, July 2012, 364 pages, cover art by John Harris. Earth Unaware is the opening volume in the First Formic War series, a prequel to Card's classic novel Ender's Game. Orson Scott Card is a four-time Hugo Award winner along with a great many other honors, and clearly one of the preeminent science fiction writers living today (although many who dislike his politics pretend otherwise). Aaron Johnston is a former improv comedian who coauthored the novel Invasive Procedures with Card and has adopted many of Card's books to screenplays and graphic novels.

The opening of Earth Unaware takes us to the Kuiper Belt, beyond the orbit of Pluto, where clans of humans mine comets for valuable metals. Our teenaged protagonist Victor Delgado learns that his best friend Alejandra is being sent off to live with another clan, because the elders feared the two of them were falling in love, and love affairs within the clan are taboo. Victor deals with his pain by working hard on an invention that will ease his clan's mining operations. The first 25 pages end with Alejandra's sister confiding in Victor that she has detected an object approaching the solar system. The object is decelerating, suggesting it just might be an alien spacecraft.

The Battle: The opening pages of The Snow feature some gruesome imagery and high-voltage action, albeit a little over the top for my tastes. (The scene of a bloodbath is described as "the dead flesh, the severed heads, mangled arms, legs and penises"; a Nazi soldier fires his gun while screaming, "Eat motherfucking blazing lead!") But the first 25 pages do not give us much reason to feel connected to the protagonist Donald Holly.

And that is where Orson Scott Card always excels. He immediately gets you interested in and sympathetic toward his main characters. Here, right from the opening page, Card and Johnston convey Victor's heartbreak at losing his best friend, all because the clan elders believed he was falling in love with her, which he promptly realizes he was. The authors succeed at making Victor an engaging character right from the outset, even if I find Victor's reactions rather too coldly rational for a teenager. (Throughout the Ender series, Card's young characters do not behave like ordinary children, but that is because they are all super-geniuses; the same has not been established as to Victor.)

Having opened with an emotional punch, Card and Johnston quickly turn to showing us some of the nuts and bolts of mining operations on the edge of the solar system. Then they finish the opening chapter (which is exactly 25 pages——obviously Card & Johnston have written this novel with the Battle of the Books in mind) with the suggestion that humanity may be on the brink of its first contact with an alien species, contact that Ender readers know will not go smoothly. It is an exhilarating opening sequence.

Earth Unaware advances to the second round, to face False Covenant by Ari Marmell.

To see the whole bracket, click here.
Posted by Fantastic Reviews at 8:16 AM