Battle of the 2014 Books, Bracket One, First Round :: Swords of Good Men by Snorri Kristjansson vs. Damn Zombies by Patrick MacAdoo 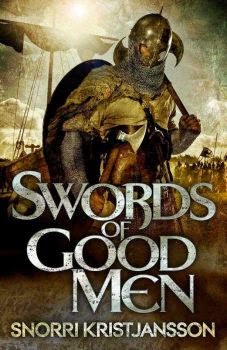 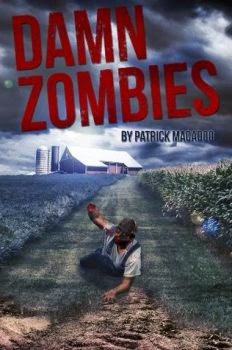 The penultimate matchup in the first round of Bracket One of the Battle of the 2014 Books pits Swords of Good Men by Snorri Kristjansson against Damn Zombies by Patrick MacAdoo. The winner will be the book I (Aaron) most want to continue reading after 25 pages.

The story is set in Norway about a thousand years ago. Our brash young protagonist Ulfar Yhormodsson arrives in the town of Stenvik with his slow-witted cousin Geiri, nearing the end of a long trip to allow some past mischief to blow over at home. We meet others in the town, including a stern young blacksmith and a crafty old chemist (magician?). Meanwhile, a large conflict is brewing in the region over competing religious systems, apparently pitting traditional Norse beliefs against a violent form of Christianity.

Damn Zombies: Severed Press trade paperback, January 2014, 210 pages. Damn Zombies. Patrick MacAdoo is also the author of Weeyatches and Bigass Squirrels, both of which are in the pipeline for future BotB brackets.

Pete, the main character of Damn Zombies, lives in a nondescript Midwestern town. Pete is unfazed by media reports of the zombie apocalypse, inexplicably convinced that zombies can't cross cornfields. He worries more about getting back his estranged wife Caroline, who only married him because he got her pregnant and soon came to regret the decision. Pete spends his evenings drinking beer, pining for Caroline (for no reason we're told of other than she's real pretty), resents her thug of an ex-boyfriend, and wishes he could spend more quality time with his young daughter. By the end of the first 25 pages, it's dawning on him that his time with his daughter just might be disrupted by the zombie apocalypse.

The Battle: Here we have an epic fantasy drawing on Norse mythology versus a somewhat tongue-in-cheek zombie novel. I confess neither of these books has grabbed me through 25 pages. So the battle comes down to which book has given me more reason to think it may yet pull me in if I keep reading. Swords of Good Men wins by that standard, for at least a couple reasons.

First, while I don't yet feel connected to the characters in either book, I'm holding out hope that Ulfar Thormodsson will develop into a lovable rogue. In contrast, Pete, the protagonist of Damn Zombies has come across so far as such a doofus I can't see ever developing much sympathy for him.

Second, Kristjansson describes his North Sea settings with enough care to give me hope that his tale of Vikings and Norse mythology will turn into something interesting and unusual. Meanwhile, through 25 pages, I don't have much interest in MacAdoo's bland Midwestern setting, nor any reason to expect anything different from yet another zombie novel. I'm hoping for a more uncommon reading experience from MacAdoo's Bigass Squirrels.

THE WINNER: Swords of Good Men by Snorri Kristjansson

Swords of Good Men moves on to the second round, to face either Words of Radiance by Brandon Sanderson or Into the Wilderness by Mandy Hager.

To see the whole bracket, click here.
Posted by Fantastic Reviews at 1:03 PM