Battle of the 2014 Books, Bracket One, Second Round :: What Makes This Book So Great by Jo Walton vs. Annihilation by Jeff VanderMeer 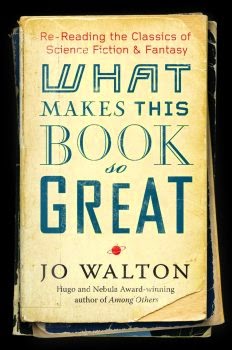 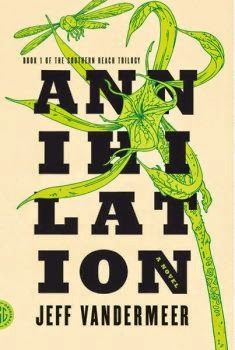 Our second match in the second round of Bracket One of the Battle of the 2014 Books pits What Makes This Book So Great by Jo Walton against Annihilation by Jeff VanderMeer. The winner will be the book I (Aaron) most want to continue reading after 50 pages.

What Makes This Book So Great: Tor hardcover, January 2014, 446 pages, cover design by Jamie Stafford-Hill. This is a collection of columns by Jo Walton, originally for the Tor.com blog, giving her thoughts on rereading some of her favorite books. (By the way, What Makes This Books So Great wins major cool points, because Lena Dunham totally packed a copy to take with her to the Iowa Writers Workshop in the first episode of the new season of Girls. Not, y'know, that I watch or anything.) What Makes This Books So Great reached the second round by defeating The Dagger of Trust by Chris Willrich.

The first 25 pages of What Makes This Books So Great consisted of an introduction and the first seven columns. The next 25 pages give us nine more columns, with topics ranging from established classics like Arthur C. Clarke's Against the Fall of Night and Janissaries by Jerry Pournelle to more recent work such as Lady of Mazes by Karl Schroeder and Black Wine by Candas Jane Dorsey.

Annihilation: Farrar, Straus & Giroux trade paperback, February 2014, 195 pages, cover art by Eric Nyquist. Annihilation is the opening volume in VanderMeer's Southern Reach Trilogy, which continues with Authority and Acceptance. Annihilation advanced to the second round with a win over The Talent Sinistral by L.F. Patten.

In the opening pages of Annihilation, an expedition of four women (always referred to by occupation rather than by name) entered "Area X," a strange place that has defeated eleven prior expeditions. They quickly discovered a vast subterranean structure, which our narrator (the biologist) strangely labeled the "tower." Meanwhile, we learned that the team leader, a psychologist, has been using post-hypnotic suggestion to control the team, but our narrator has become immune. As the next 25 pages open, the anthropologist has disappeared, with the psychologist giving the unconvincing explanation that she quit in the middle of the night and went home. Then the biologist/narrator and the surveyor make a deeper descent into the bizarre "tower."

The Battle: I loved the opening pages of What Makes This Book So Great, because not only was Jo Walton writing about good science fiction books——which I think is a swell thing to do, as anyone reading this blog should know——but she was also making interesting broader points about literature and genre, for example her observations as to how mainstream authors approach fiction differently than genre authors. The next 25 pages, however, have settled more into what I expected going in: short reviews of several of Walton's favorite books. Those reviews are nicely written, and in some cases caused me to add books to my to-purchase list, starting with Don't Bite the Sun and Drinking Sapphire Wine by Tanith Lee. But it's a lot to expect a collection of essays to keep pace with a good novel as it builds dramatic tension.

And the second section of Annihilation does a superb job of building dramatic tension. VanderMeer spends enough time on our narrator's backstory, for example how she turned to biology as an escape from her dysfunctional family growing up, to keep us connected. But the narrative's primary areas of focus are the mysterious nature of this expedition and its secretive leader, and the bizarre upside-down tower, where the bodies of tiny creatures on the walls spell out ominous messages. And that's not all:

The first thing I noticed on the staging level before we reached the wider staircase that spiraled down, before we encountered again the words written on the wall . . . the tower was breathing. The tower breathed, and the walls when I went to touch them carried the echo of a heartbeat . . . and they were not made of stone but of living tissue. Those walls were still blank, but a kind of silvery-white phosphorescence rose off of them. The world seemed to lurch, and I sat down heavily next to the wall, and the surveyor was by my side, trying to help me up. I think I was shaking as I finally stood. I don't know if I can convey the enormity of that moment in words. The tower was a living creature of some sort. We were descending into an organism.

Our narrator's growing unease and paranoia are so adeptly conveyed, it almost doesn't matter what the answers to these mysteries prove to be. I don't care if there's a horrible, Lovecraftian monster in this pit, or if it's all just some odd psychological test. Either way, I want to keep reading.

THE WINNER: Annihilation by Jeff VanderMeer

Annihilation moves into the semifinals, where it will take on The Emperor's Blades by Brian Staveley.

Posted by Fantastic Reviews at 2:40 PM