Battle of the 2014 Books, Bracket One, Second Round :: Empress of the Sun by Ian McDonald vs. The Emperor's Blades by Brian Staveley 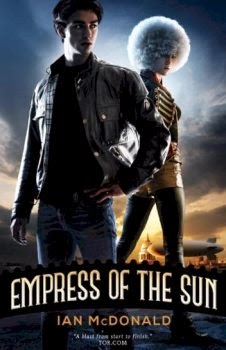 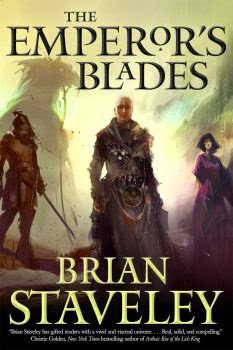 We begin the second round of Bracket One of the Battle of the 2014 Books with Empress of the Sun by Ian McDonald against The Emperor's Blades by Brian Staveley. The winner will be the book I (Aaron) most want to continue reading after 50 pages.

In the first 25 pages of Empress of the Sun, Everett Singh and his steampunk gypsy companions arrived in a new alternate universe, where they promptly crashed their airship. In the second 25 pages, Everett guesses the bizarre nature of this universe, which caused the crash. They will need to find a way out of this universe before our villain Charlotte Villiers can locate them. Meanwhile, an alternate version of Everett called Everett M. realizes that the incredibly deadly nanotechnology he brought to the other Everett's universe has (predictably) escaped. He desperately tries to track it down before this entire world is destroyed.

The Emperor's Blades: Tor hardcover, January 2014, 476 pages, cover art by Richard Anderson. The Emperor's Blades is the first volume in Staveley's Chronicle of the Unhewn Throne high fantasy series. It reached the second round with a lopsided win over The Barrow by Mark Smylie.

The first 25 pages of The Emperor's Blades introduced us to our main characters Kaden and Valyn, the two sons of the emperor. Neither young man is enjoying a life of luxury. Rather Kaden, heir to the throne, is receiving harsh mental training in a spartan, remote monastery, while Valyn is learning the ways of an elite fighting group who ride giant hawks into battle. Valyn was investigating the murder of an entire ship's crew, when he received word of the death of his father the emperor. The last dying member of the slaughtered ship's crew warned Valyn that he is in danger from a plot. In the next 25 pages, Valyn desperately asks his superiors for permission to go to Kaden, but they refuse. Unsure of whom to trust, he decides to confide in his fellow cadet and good friend (and potential love interest?) Ha Lin. Before they get far into the conversation, they find themselves (surely not coincidentally) in a tavern on crumbling stilts, as it collapses into the sea.

The Battle: : Both these books start out very strong, with well-drawn characters, creative world-building, and interesting storylines. I don't much want to put either book down, but I'm forced to choose one to keep reading. . .

Through 50 pages, I am hugely impressed with Brian Staveley, who I believe has all the tools to become a major voice in fantasy. I am most interested to see where he takes The Emperor's Blades after a very solid opening.

Of course, Ian McDonald is already a major voice in science fiction and I've liked his Everness series so far; however, by the third book it's starting to seem that Ian McDonald feels compelled to toss in every bizarre type of alternate universe he can conceive of. The new world Everett has crashed on is so absurd (think Edwin Abbott's Flatland) as to severely strain my suspension of disbelief.

There is a good action scene in the second 25 pages of Empress of the Sun, but it's triggered by Everett M.'s unforgivably selfish decision to bring to (our) Earth nanotechnology that he has seen first-hand is incredibly deadly. His belief that he could keep it locked up in a peanut butter jar was so foolish that it's hard to cheer for him when he later does battle with the escaped nanotech, even if the future of the world is at stake. Everett M. is a conflicted character, but his willingness to endanger an entire world to save himself makes it hard to sympathize with him on any level.

In contrast, the second 25 pages of The Emperor's Blades place Valyn and his friend Ha Lin in a moral dilemma with no easy answer, as Valyn tries to save an innocent young woman from a slowly collapsing building:

When Valyn pulled the unconscious girl through the doorway, he found, to his horror, that the gap had grown to almost a dozen feet. . . .

Lin read the situation instantly, shook her head, then stepped right to the edge of the yawning crevasse.

"Throw her," she said, gesturing.

Valyn stared at the gap, aghast. Salia couldn't have been three quarters of his weight, but there was no way he could toss her the full distance. He glanced down. The jagged pilings bristled like spikes.

"You have to! Now, fucking throw her! I'll catch her wrists.

It was impossible. Lin knew it as well as he did. Which is why she wants me to do it, Valyn realized in a rush. Salia was dead weight. He could make the jump alone, but just barely. As long as he held on to the unconscious girl, he was trapped on the wrong side of the gap, pinned to a burning, teetering shell that would drag him to his death. He saw it all clear as day, but what could he do? Drop the unconscious girl and leave her to die? It was the right choice, the mission-responsible choice, but this wasn't a 'Kent-kissing mission. He couldn't just . . .

"I'll jump with her," he shouted, preparing to sling Salia across his back. "I think I can make it."

Lin's eyes widened with horror. Then they hardened.

Before Valyn understood what was happening, she had her belt knife out, was cocking her arm, then throwing. Valyn watched, stunned, as the bright blade flashed end over end in the sun, then buried itself in Salia's neck with a sudden gush of hot, bright blood.

That is a terrific passage, playing out in only half a page. Even if you think Lin made the wrong choice, it's easy to sympathize with her reasons.

I'm only 50 pages in, but everything I've read so far in The Emperor's Blades tells me I'm looking at an outstanding new storyteller at work.

THE WINNER: The Emperor's Blades by Brian Staveley

The Emperor's Blades advances to the semifinal round to face either What Makes This Book So Great by Jo Walton or Annihilation by Jeff VanderMeer.

Posted by Fantastic Reviews at 3:31 PM