Battle of the 2014 Books, Bracket One, First Round :: Words of Radiance by Brandon Sanderson vs. Into the Wilderness by Mandy Hager 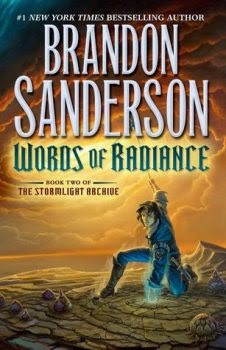 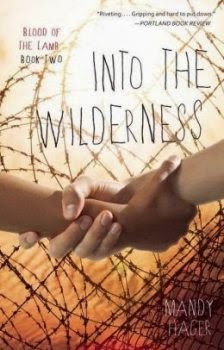 Our final first round match in Bracket One of the Battle of the 2014 Books features Words of Radiance by Brandon Sanderson against Into the Wilderness by Mandy Hager. As always, the winner will be the book I (Aaron) most want to continue reading after 25 pages.

Words of Radiance: Tor hardcover, March 2014, 1080 pages, cover art by Michael Whelan. Words of Radiance is the second volume of Sanderson's Stormlight Archive epic fantasy series. Like The Wheel of Time, which Sanderson completed after Robert Jordan's death, The Stormlight Archive is a multi-volume series of door-stopper fantasies. Sanderson has written several other novels and won the Hugo Award for his novella "The Emperor's Soul."

Words of Radiance begins with a flashback to when Jasnah Kholin was introduced to Shadesmar, the mythological realm of the magical spheres called spren, and soon after was witness to the assassination of her father, the king. Six years later, Jasnah has taken on a young woman named Shallan as a sort of apprentice. As they sail together through the frigid seas bordering the south of the kingdom, Shallan is delighted to learn that Jasnah is attempting to arrange for Shallan to marry Jasnah's cousin. I don't know how any of this relates to what happened in the first volume of this series, which I have not read, but so far I'm not having any difficulty following the story.

Into the Wilderness: Pyr hardcover, January 2014 (published in New Zealand in 2010), 331 pages, cover images by Roy Hsu & Koolstock. Into the Wilderness is Book Two in Hager's Book of the Lamb young adult series. Hager has written multiple YA books that have been well received in her home of New Zealand. Book of the Lamb is her first work to receive wide distribution in the U.S.

Into the Wilderness begins on a small boat being tossed about a large ocean. Our dark-skinned protagonist Maryam has escaped the racial and religious oppression of her island home, along with her best friend Ruth and her white boyfriend Joseph. Also with them is Lazarus, another white boy of privilege who, unlike Joseph, is an unsufferable prick who didn't see anything wrong with the repressive system they just left. (Makes things easier on the author when the characters are thoughtful enough to bring a bad guy along with them as they travel, eh?) Our characters don't know what to expect on their journey, having been assured by their society's untrustworthy leaders that the rest of the world was destroyed in some calamity. On the first leg of the trip, Maryam consoles Ruth, who was raped by their society's leader (Lazarus's father), and makes out with Joseph.

The Battle: I have a confession to make: I harbor a mild prejudice against multi-volume series of fat fantasy novels. There's a sameness to many fat fantasies, and as a relatively slow reader I am easily intimidated by the sheer mass of such books. So while Into the Wilderness struck me as an appealing YA book, I was not especially looking forward to diving into Words of Radiance.

That turned around quickly. After just the prologue and the first chapter of Words of Radiance, Brandon Sanderson is already well on his way to winning me over with his sprawling series. The writing is nice but not distracting. The characterization is strong so far——I am especially interested in Shallan, a very uncertain but likable young character. The magical system involving the "spren" seems interesting. I liked Shallan's comparison of the spren, "fragments of human expectation, given life," to how authority often comes simply from acting with self-confidence. And the story already has some nice scenery, such as the huge santhid swimming alongside Shallan's ship. I'm looking forward to more of this book, and suddenly the idea of reading thousands of pages in this series doesn't seem so daunting.

Meanwhile, I've already lost interest in Into the Wilderness after the first two chapters. The fundamental problem for me is that the story lacks any subtlety, even for a YA book. The characters are either shining with purity or rotten to the core. The dialogue is clunky, because Hager is so intent on getting the characters to make her points as clearly as possible. And the narrative repeatedly drops into lecture mode. For example, when Joseph notes that a dolphin swimming past shows no fear, Maryam answers:

"Why would it, when it has free rein of this vast ocean?" Fear is something you have to learn first hand, she thought, remembering her own shocking swing from bliss to dread after she had Crossed from the atoll to the Holy City. Could anything be worse than knowing those you most trusted had betrayed you? She reckoned not.

This is a fine passage, until the last two sentences. The "Could anything be worse" line is an unnecessary intrusion by the author. For Hager to then actually answer her own rhetorical question demonstrates an appalling lack of trust in her readers. I sensed the same lack of trust in multiple other passages in the first 38 pages of Into the Wilderness, leaving me less than anxious to read more.

Words of Radiance advances to the second round to take on Swords of Good Men by Snorri Kristjansson.

To see the whole bracket, click here.
Posted by Fantastic Reviews at 10:54 AM