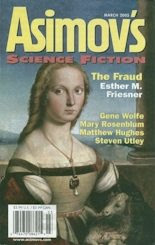 The Magazine of the Week is the March 2005 issue of Asimov's Science Fiction (on the cover, Raphael's "Lady with a Unicorn" from 1506), containing this year's Hugo Award-winning short story "Tk'tk'tk" by David D. Levine. This story cleverly tells of a traveling salesman in the future, sent to an alien world that has no use for his products. "Tk'tk'tk" is the phrase he repeatedly hears from customers, which is untranslatable but carries a clear tone of condescension. Even though I voted for "Tk'tk'tk" I was quite surprised it won, since David D. Levine is a relative newcomer to the field who has yet to develop a great fan following, as evidenced by the fact that Asimov's did not even list his name on the cover of the Magazine of the Week.

The Hugo Award is the most prestigious award in science fiction and fantasy. It is presented at the World Science Fiction Convention, the annual gathering of SF's true believers, and voted on by the fans attending the convention. (Incidentally, "Tk'tk'tk" won even though it did not receive the most first-place votes. The Hugos use a preferential balloting system where voters rank the nominees, and if your first choice is eliminated your vote transfers to your next choice, until someone gains a majority. This system much better reflects voters' actual preferences than ordinary voting. If we used it in the U.S., it would have altered the outcomes of two of the last four presidential elections.)

This year's Worldcon was held last weekend in Anaheim, and I was at the Hugo ceremony Saturday night. I rather doubt that I will make next year's Worldcon in Yokohama, Japan, but I will be there the following year, since I am delighted to report that the fans at this year's Worldcon voted to hold the 2008 convention here in Denver. (This was an upset -- Chicago was considered the front-runner.)

This year's Best Short Story Hugo was presented by Harlan Ellison. At the convention, Ellison was in the irascible form described in recent BOTWs. But his cantankerous shtick is by now completely familiar to and accepted by SF fans. At one panel during the convention he went on a tirade directed toward the audience and when he ended by shouting, "Fuck the lot of you!" the crowd responded with a warm round of applause. For all his bad-boy posing, Ellison showed his true colors when he (i) was very gracious in accepting a surprise special award for his career contributions to SF at the Hugo ceremony, (ii) patiently signed books for fans at a signing scheduled for one hour that ended up running over three hours, and (iii) most importantly, was very friendly to yours truly while signing past Books of the Week Rumble and Ace Double D-413, which signatures I expect will add several hundred dollars to what my children will get for my collection for when I die.

At the Hugo ceremony Ellison read the list of nominees for Best Short Story, but then declared he wasn't going to tell us the winner and started off the stage with the envelope. After he was corralled back to the podium, he shouted at the gallery of nominees, "Levine, you here?" There was a muffled, "Yeah!" and Ellison barked, "Get your ass up here!" Levine was so excited he bounced up to the stage and wrapped the cantankerous Harlan Ellison in a giant bear hug. Congratulations to David D. Levine for surviving that and for winning his first Hugo Award.

Next week's Magazine of the Week will contain the Hugo winner for Best Novelette.
Posted by Fantastic Reviews at 11:07 PM