Aaron's Take on the Hugo Ceremony 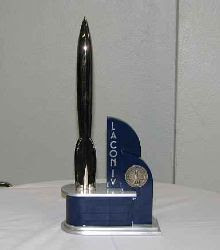 This year was only the second time I have been able to attend the Hugo Award ceremony, and it was just great. Sitting in the front row behind the nominees' section, I felt like a film buff who manages to sneak into the Oscars and sit behind Jack Nicholson.

Connie Willis was a delightful toastmaster as expected. The running gag about Robert Silverberg trying to upstage her was silly, yet the two of them are so charming that everyone enjoyed it anyway. All of the presenters were entertaining and all of the recipients gracious, even Harlan Ellison . . . well, except for the groping Connie Willis bit.

I was very happy with all of the Hugo winners, particularly in the fiction categories. Two of the winners (Robert Charles Wilson and David D. Levine) were my #1 choices, and the other two (Connie Willis and Peter S. Beagle) were my #2 choices and both people who richly deserve the recognition. Yes, I know Connie had already won eight, but she richly deserves as many as we can throw at her.

Some of the highlights of the ceremony:

· John Scalzi gave a very generous speech accepting the Campbell Award for best new writer, devoting nearly all his comments to praise of the other nominees and their works.

· The Best Editor award was a high point of the evening. Betty Ballantine gave a heartfelt speech about what a pain in the rear authors are to work with and how much she has loved it. Then we had a Susan Lucci moment, when she presented the award to David Hartwell, who had been nominated 31 times before without ever winning. (Ironically, just the day before the decision was made to split the Best Editor award into two categories, in no small part to ensure Hartwell would finally win one.) Finally, Betty Ballantine was openly surprised and moved at receiving a special award for her tremendous contributions to the field. Most of the crowd gave her a standing ovation -- and those who didn't heard about it later from Harlan.

· Actress Morena Baccarin accepted Serenity's award for Dramatic Presentation, Long Form and read a speech from Joss Whedon. Whedon spoke of his memories of searching out Hugo winners to read when he was young. He didn't know who "Hugo" was, but he knew he kicked that Pulitzer guy's ass when it came to picking great books. This was a great contrast to the disdain Hollywood used to show this award.

· Harlan Ellison was a laugh presenting the Best Short Story award. Barking at David D. Levine, "Get your ass up here!" was certainly a new way to announce the winner. None of us will soon forget the unwanted bear hug Levine gave Ellison.

· Connie Willis was so busy as toastmaster that she forgot to worry about her own category, and was caught by surprise and nearly reduced to tears by her Best Novella award. She then had exactly three seconds to shake it off and move us on to the Best Novel award.

Congratulations to all the winners!
Posted by Fantastic Reviews at 4:50 PM