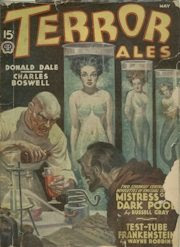 The Magazine of the Week is the May 1940 issue of Terror Tales, a "weird menace" or "shudder" pulp magazine.

In the late 1930s, the pulp market was saturated with a host of these weird menace magazines. Editor Harry Steeger, inspired by a visit to the macabre Grand Guignol Theater in Paris, created some of the earliest and most successful weird menace pulps, including Terror Tales, Horror Stories, and Dime Mystery. The weird menace pulps followed a common formula, in which women were placed in mortal peril by bizarre villains, to be rescued by a dashing hero. The lurid covers of these magazines routinely depicted the torture and humiliation of seminude women in disturbingly graphic ways, such as having limbs cut off or being heaved into buzzsaws or vats of boiling liquid. So as not to tax your sensibilities, the Magazine of the Week is one of the more mild weird menace covers (also, the really gruesome shudder pulps are very expensive and I have yet to cough up the cash for one). The most successful of the weird menace cover artists, John Howett, is said to have grown increasingly disgusted with himself until finally he burned all his own cover paintings. The stories had delightfully campy titles, for instance the Magazine of the Week includes the titles "Where Dwell the Living Dead" and "Prey for the Daughter of Hell." The tales typically featured apparent fantastic elements, yet the magazines cannot be considered science fiction or fantasy, because the authors were instructed to give a non-supernatural (if absurdly unlikely) explanation for everything by the end of the story. In this respect, the weird menace pulps were sort of an early, R-rated version of Scooby-Doo.

We can charitably describe these magazines as early horror fiction, although too often they seemed designed less to frighten the readers than to appeal to their worst sadistic and misogynistic fantasies. In 1940 and 1941, the weird menace pulps were driven from the market by threats of censorship, led by New York Mayor Fiorello La Guardia. Several of the magazines folded, while others repositioned themselves as straight mystery magazines. The repositioned magazines included Thrilling Mystery, which we saw last week, and Dime Mystery, which we will show next, after a possible break from the pulps to acknowledge a Hugo Award winner or two.
Posted by Fantastic Reviews at 11:52 PM