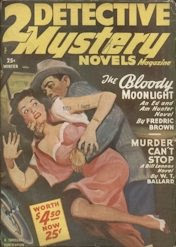 The Magazine of the Week is another mystery pulp, the Winter 1950 issue of Two Detective Mystery Novels, with novel-length cover story The Bloody Moonlight by Fredric Brown.

As a collector of old science fiction, what first got me interested in other genres of pulp magazines was that so many of my favorite SF writers from the pulp era also wrote for non-SF pulps. There was a particular overlap between mystery and science fiction. Yet while a great many writers contributed to both mystery and SF pulps, they were nearly always better known for one or the other. The most notable exception was Fredric Brown. Fredric Brown was equally popular among readers of both SF and mystery. He was a bit more prolific in the mystery genre, but then his mysteries often included an element of science fiction or fantasy, for instance the murders in The Bloody Moonlight are seemingly committed by a werewolf. Brown was a writers' writer in both genres -- Mickey Spillane called Fredric Brown his favorite writer of all time, and Brown was one of three people to whom Robert A. Heinlein dedicated his classic novel Stranger in a Strange Land. Fredric Brown has been unfortunately neglected in modern times, but old copies of his books and magazines remain prized collectors' items, particularly because they are sought by both SF and mystery collectors.

Fredric Brown has always been a favorite of mine and we will cover more of his work in future BOTWs, but first we will continue our history of the pulp magazines, with the Magazine of the Week providing an interesting segue. Two Detective Mystery Novels was a straight mystery pulp, but under its previous title of Thrilling Mystery the magazine was part of perhaps the strangest pulp genre, the "weird menace" pulps. Next week's Magazine of the Week will be an example of the "weird menace" genre.
Posted by Fantastic Reviews at 10:54 PM