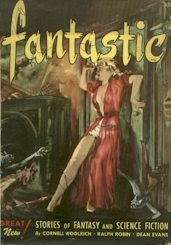 In honor of Mickey Spillane, who passed away recently at the age of 88 (sadly not from a gunshot to the chest), the Magazine of the Week is the November-December 1952 issue of Fantastic magazine, containing Spillane's "The Veiled Woman" (with appropriately sexy cover art by Barye W. Phillips).

Mickey Spillane was world famous for his best-selling hard-boiled mysteries, starring tough-as-nails private eye Mike Hammer. Leave it to me to honor him with his one and only (so far as I am aware) foray into the science fiction genre. Not to worry, though, "The Veiled Woman" may contain Martians and an interplanetary plot, but it has just as much sex and violence as all of Spillane's work, and is loaded with lines like, "She had a body that would melt a glacier from across the street." Like Spillane's first novel, I, The Jury, "The Veiled Woman" ends with the hero shooting a naked woman in the gut in cold blood.

The hard-boiled narrative voice is a uniquely American contribution to literature -- as well as to cinema, in the form of film noir. The hard-boiled subgenre was invented in a particular pulp magazine, and first popularized in the detective stories of a particular author. This author is almost forgotten today, but he inspired an entire generation of hard-boiled detective writers, including Dashiell Hammett (creator of Sam Spade), Raymond Chandler (creator of Philip Marlowe), and later Mickey Spillane (who deliberately patterned Mike Hammer after this author's best known detective). Returning at last to our history of the pulp magazines, next week's Magazine of the Week will be a rare pulp magazine starring the first successful hard-boiled detective, the precursor to Sam Spade, Philip Marlowe, and Mike Hammer.
Posted by Fantastic Reviews at 10:07 PM